No not another video showing how well someone can play a keyboard on an iPad, or putting the Surface tablet up against an Apple device. But rather a video showing off some new software a student has developed that enables the iPhone to turn any table into an invisible keyboard via surface tapping.

The iPhone and invisible keyboard video comes our way courtesy of the Telegraph, which shows off the system known as Vibrative, which utilises the iOS smartphone’s three dimensional accelerometer to measure things like the frequency and strength of each vibration on the keyboard. The system then compares those characteristics to ‘training data’ to find out each tap’s location, and this is then converted into a key press on the virtual keyboard.

Apparently at the moment Vibrative determines the intended key correctly roughly 80% of the time, and data is delivered to an auto-correct dictionary so that typed words come out right. 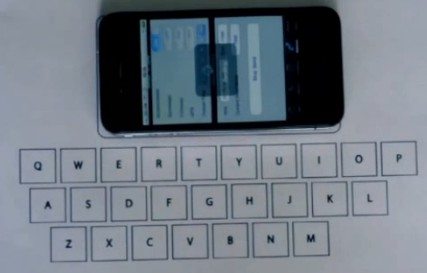 Computing student at Goldsmiths, and creator of the Vibrative system Florian Kraeutli, has said that the signals he’s collecting are somewhat on the weak side, and currently the system is more a proof of concept; however if the accelerometer could be made more sensitive, the accuracy could be easily improved.

The Vibrate system seems to be more accurate on smaller surfaces that vibrate more with each tap. Kraeutli suggests that accelerometers in smartphones might be set to be less sensitive to conserve battery power.

Anyway, we have embedded the footage for our readers viewing consideration below, so head on down and hit that play button to check out Vibrative in action with an iPhone, and feel free to let us know your opinions on this new system by dropping us a line below.

One thought on “iPhone Vibrative Invisible Keyboard via surface tapping”