The launch of the HTC Droid DNA for the Verizon Wireless network didn’t really hold any surprises for us, as we pretty much knew all the basic specs. While the handset does look pretty good on paper there could be one or two missing features that could be a deal breaker for some, and when you compare the HTC Droid DNA against the Samsung Galaxy S3 it does become evident.

Don’t get us wrong the DNA is still a pretty decent phone and does hold its own against the Galaxy S III in some areas (which we’ll get to) but will this be enough when compared to a consumer favorite? HTC made the Droid DNA official yesterday and it’s clear to see that the Droid is back and while it does offer some great design features, it’s the inside that matters and you will not be let down.

Before we get down to comparing the two handsets we felt you would want to know that the Droid DNA ships on the 19th of November and will be available to purchase in Verizon stores from the 21st. The full retail price is $599, but if you sign up to a two-year contract you’ll pay just $199 instead. More details on this can be found by visiting the official Verizon website here. 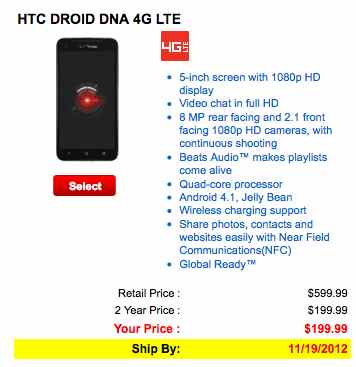 As we have already told you the HTC Droid DNA will be powered by the 1.5GHz Qualcomm Snapdragon processor, which is the same as the one inside the LG Optimus G. While this is a powerful processor there is an issue with overheating, so will be interesting to see how HTC has managed to get over this issue. This is compared to the 1.4 GHz Quad-core Cortex-A9 processor in the Galaxy S3.

HTC’s latest Droid smartphone packs 2GB of RAM and just 16GB of storage, which compared to the 1GB of RAM and up to 64GB of storage for the Galaxy S3 shows that while the former wins the first round the latter wins the second. There are concerns with the low storage capacity of the Droid DNA because there’s no SD Card slot to help increase storage, which for some could be a huge problem.

While the Droid DNA comes with the 5-inch Super LCD 3 display and is protected with Gorilla Glass 2, the Galaxy S3 has a smaller 4.8-inch Super AMOLED capacitive touchscreen. It’s suggested that the screen for the DNA is of a much better quality, but we’re sure that many of you will disagree with this.

When it comes to the battery these two smartphones are evenly matched, with the DNA having 2020mAh and the S III packing 2100 mAh. It’s hard to say which will last the longest, but one would presume that the demands from the slightly larger and better quality screen from the DNA could cause more of a power drain.

So which is the best the HTC Droid DNA or the Samsung Galaxy S3? It’s clear to see that the former is clearly targeting the Galaxy Note 2, but a majority of you will compare it more to the Galaxy S3 because of its size and similar processor power. With this in mind while the DNA does have a better display, there’s no getting away from the fact that 16GB storage and no microSD slot could be a deal breaker for some.