The other day we saw news of the Huawei Ascend W2 hit the net, a Windows Phone 8 smartphone that is expected to be unveiled alongside its more affordable sister handset the Huawei Ascend W1 during CES 2113 in January. And now a real life picture of the Ascend W1 has surfaced on the net waves, showing that the smartphone should arrive in two colour options.

The Huawei Ascend W1 picture comes our way courtesy of GSM Arena, with the image first popping up on Twitter, and shows us that the Windows Phone should be coming in both blue and white colour options, but other than that doesn’t reveal much else.

Previously we reported on the expected specifications for the Huawei Ascend W1, although those specs have yet to be officially confirmed. However the handset is expected to come out to play packing a 4-inch WVGA touch screen along with a 1.5GHz dual core Krait processor. 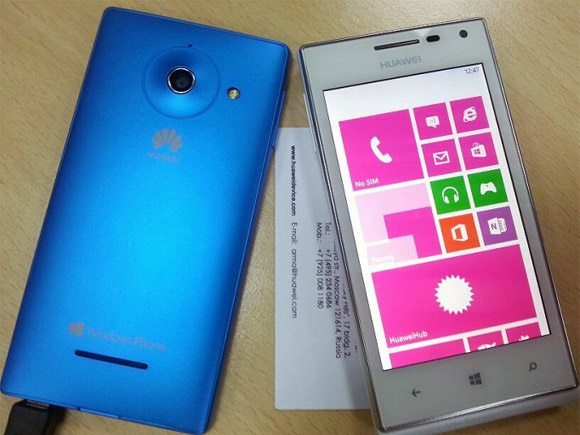 Other rumoured specifications include, 512MB of RAM along with 4GB internal storage, a 400Mhz graphics chip, a 5 megapixel rear facing auto-focus camera with LED flash, it rumored that the smartphone will have a front facing camera, Bluetooth 2.1, WiFi, a 2000mAh battery said to deliver up to 10-hours of talk time, and runs Windows Phone 8 of course.

As mentioned above it is expected the Ascend W1 will make its dÃ©but during CES 2013 in January, although the rumour is the smartphone will probably be only available in Asia initially, and is expected to command a price tag of somewhere in the region of $300.

Would any of our readers consider picking up the Huawei Ascend W1 once the WP8 smartphone becomes available in other markets?