Over the years there has been an ongoing debate as to the use of a touchscreen as there are those who love the technology, and those that hate not being able to truly feel what’s going on. The likes of Apple are sticking to this and love the idea that their customers get no sensation at all when using their iOS devices. However, the likes of Samsung offering Haptic feedback to give them a sense of a little more control.

There is a problem here though because while you feel more in tune with the device it’s not exactly like using a pen and paper. However, Sony might be on to something that could change all that when we look over a recent patent filing for a stylus with a difference, as it would feature friction-based haptic feedback technology.

Before we go into the details there’s something that we have overlooked. Firstly, Sony currently has no such phablet device, so they could either be planning on releasing one in 2013, or there’s the possibility that Sony could license the technology to someone like Samsung. If they were to go with the latter then maybe we could see the Samsung Galaxy Note 3 with a friction-based haptic feedback stylus? 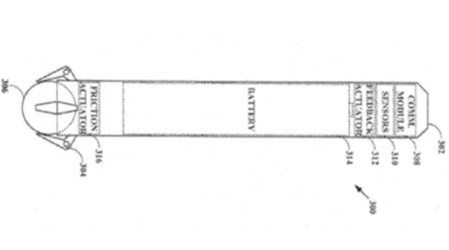 There’s not just the one patent filing, there are a few of them, but they all have one thing in common and that’s to give the stylus the feeling of friction when it’s being moved across the devices screen. The result would mean that depending on what you were doing the stylus could move along the screen easily, or hard. While the idea of the patent using a “rolling contact ball gripping mechanism,” to increase or decrease the friction of the stylus across the screen sounds easy in theory, getting it into practice will be much tougher.

The benefits for such a technology are pretty impressive because it would bring a whole new dimension to touchscreen devices that require the use of a stylus, and while we were impressed with how Samsung made improvements to this technology on their Note 2, there’s no getting away from the fact that if Sony does go ahead with the idea, then things will change for the better. The question is will Sony produce their own phablet device, or would it be in their interest to license it to Samsung with the possibility of being used on the Galaxy Note III?