Word has it that the Aquos Phone Zeta SH-02E will hit the mobile space first on the 29th of this month, and it will be its first smartphone to sport Sharp’s IGZO display rather than the world’s first. So as both devices do carry that IGZO tech we thought we’d do a little comparison between both devices.

So here we go… the Aquos Phone Zeta SH-02E features a 4.9-inch 720p LCD with IGZO technology, whilst Asus Padfone 2 packs a 4.7-inch 720p LCD again with IGZO tech. The Zeta comes packing a 1.5GHz Snapdragon S4 Pro chip and Adreno 320 graphics, whilst the Padfone 2 has the same 1.5GHz chip and graphics, so other than a slightly larger display on the Zeta, there’s not a great deal of difference. 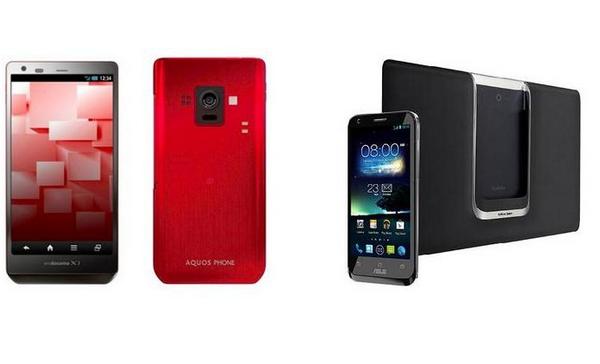 The Aquos Phone Zeta SH-02E features 2GB of RAM along with 32GB internal storage and microSD expansion, whilst the Asus Padfone 2 also has 2GB of RAM but with 16GB, 32GB and 64GB options and 50GB of free Asus web storage for 2-years.

The Zeta has LTE connectivity and so does the Padfone 2, whilst both handsets come with Android Ice Cream Sandwich, we do know though that Asus has promised the Padfone 2 will be updated to Android Jelly Bean at some point, and no doubt so will the Zeta, although this hasn’t been confirmed yet.

The other big thing to consider of course is that the Asus Padfone 2 is more widely available in the mobile space, whereas it is unlikely that the Aquos Phone Zeta SH-02E will see the light of day outside of Japan, although you never really know with these things as there is always a slim possibility.

But basically other than the Padfone 2 being able to dock with a tablet, there doesn’t seem to be a great deal of difference between the two.