More and more tablets are entering the mobile space, some small, some large, but just how big can you go with a tablet? When does a tablet size become just to big to be classed as a portable tablet? Most large tablets are currently 10.1-inch; however it appears that tablets are staring to grow in size, as the word is Google is to launch a 12.85-inch Touch screen Chromebook next year.

According to an article over on Android Headlines, Chinese rag Digitimes the Google guys are planning on releasing that 12.85-inch Chromebook sometime in 2013 and will support touch sensitivity, something that hasn’t been seen on hardware running the Chrome OS.

Chrome OS has come quite a way since it first released, and with the Aura update Google has shown that there is a place for Chrome OS. And apparently the word is the Google 12.85-inch Chromebook will be made by Compal, and will be the first time a Chromebook will sport a touch screen. 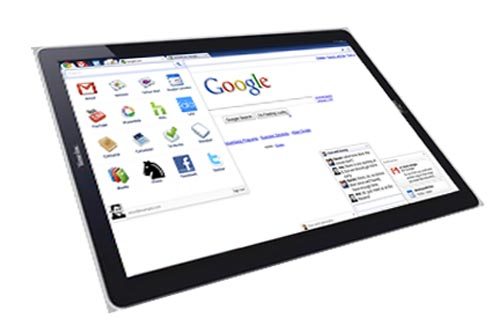 Of course if Google does release this touch screen Chromebook to the mobile space the device will be going up against Windows 8 convertible laptops that are already on the market, which could mean there is market share to be taken from Microsoft.

However, is there any point in 10-inch plus android tablets and of course Google backing these tablets if they are to release the Chrome OS 12.85-inch touch screen Chromebook? Well who knows, many of the Android faithful might like to have a larger touch screen device, albeit the Chromebook not actually being a slate but more of a laptop.

The thing is when someone purchases a tablet they probably do so because it is smaller and more portable that a laptop. Google’s mobile touch tablet operating system is of course Android, so would the Android faithful want Chrome OS to be a mobile operating system as well on Google devices?

And then there is the size, as I previously said, most popular tablets are 10.1-inch or below, so would having a 12.85-inch touch screen device be more preferable, would it be considered just as portable?

What do our readers think about the possibility of a 12.85-inch touch screen Chromebook, would you be interested in owning one over a 10.1-inch Android tablet?