Obviously judging by the image, the BlackBerry 10 L-series device is not as large as the Samsung Galaxy Note, but bigger than the iPhone 5, whilst it is fairly difficult to judge whether the BlackBerry 10 handset is roughly the same size as the Nokia Lumia 820, although could be a tad bigger. 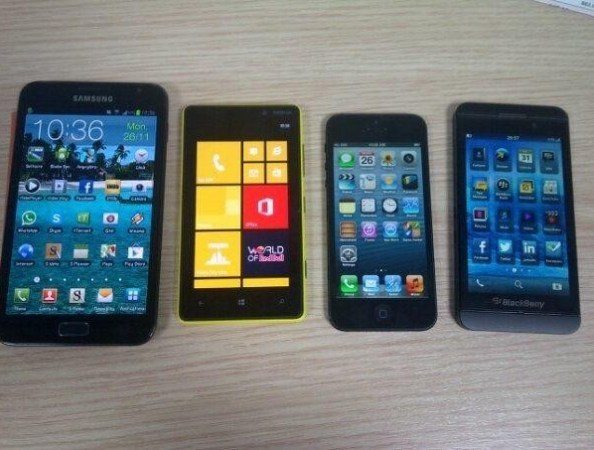 Thus it would appears that the BlackBerry 10 L-series smartphone can hold its own in the size department, and should be reasonably easy to hold in the hand, so perhaps the Canadian company have got the size right at least and looks to be pocket friendly.

However although we don’t really know for sure what screen size the BlackBerry 10 L-series offers, the screen doesn’t appear to be over large, as there is quite a bit of black plastic above and below the display, which isn’t that big a problem as they do house the microphone and speaker, and possibly the mobile antenna.

Also you might notice that the BlackBerry device is the only handset that doesn’t have any buttons outside the screen, which may or may not be to your liking.

Anyway, the big deal with BlackBerry 10 devices isn’t really the size but whether BlackBerry 10 handset can become a big success for RIM and bring them back from the brink, something we’ll only know for sure once RIM gets those devices out into the mobile space.

Any of our readers prefer the BlackBerry 10 L-series over these other smartphones?