Although they are both several months away at least, attention in the tech world is already turning to the next editions of Samsung’s flagship devices. The Samsung Galaxy S4 and Galaxy Note 3 are due for release in 2013 and previously we have discussed what changes there might be. We have also mentioned the possibility of flexible displays being used and news today suggests that the Galaxy S4 and Note 3 are even more likely to feature flexible displays now.

Now evidence is mounting even further that these new bendable displays could be replacing glass screens in Samsung phones in 2013, which of course means that it’s now completely plausible to think that both the Galaxy S4 and Galaxy Note 3 will sport them. Benefits of flexible displays rather than traditional glass will be that displays will be more durable and harder to damage and devices will also be slimmer and lighter and could also be bendy. A new report from the BBC talks about growing speculation that Samsung is now in a stronger position to mass-produce the flexible displays and reinforces the likelihood that they will be in evidence in the first devices next year.

The BBC asserts that Samsung is likely to be the first manufacture to deliver these new displays although others such as LG, Sharp and Sony are also in the game. OLED (Organic Light Emitting Diode) display technology will be used by Samsung and this will result in the next-generation displays being foldable and rollable as the plastic substrate is more flexible, lighter and thinner than when using LCD technology. As well as this OLED allows for better color reproduction and devices using OLED flexible displays may also use less power than with conventional LCD technology. 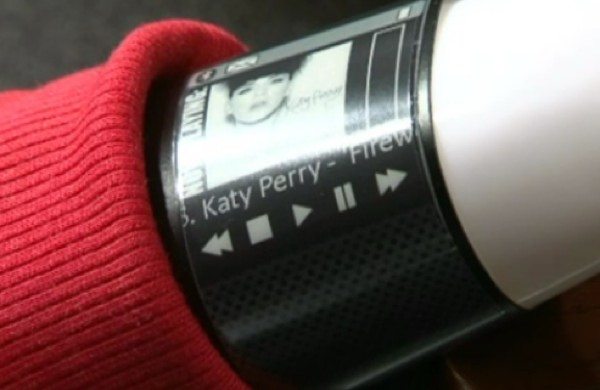 Other manufacturers are looking at alternative flexible displays. For instance many e-book readers use e-ink displays but most of these types of display are used in devices that have a rigid glass screen. LG though has been looking into making e-ink displays that are fully flexible and has now started to produce such screens. Another technology being used for flexible display development uses graphene and this is something that could completely revolutionize electronics.

Graphene is described as stronger than diamond but also flexible, lightweight, transparent and with good conduction qualities and yet it is actually a sheet of carbon only one atom thick! Professor Andrea Ferrari of Cambridge University is working on graphene bendy displays for the future and is also in collaboration on this with Nokia. Regarding flexible displays Professor Ferrari describes Samsung as “really quite advanced in this field,” adding that some good developments are also taking place using Nokia prototypes in Cambridge.

Are you a fan of the Galaxy S or Galaxy Note line and already contemplating purchasing the next iteration of either when they launch next year? How would you feel about them having flexible displays and would you appreciate the benefits? Maybe you’re concerned about whether these flexible displays would ramp up the price of the Galaxy S4 or Note 3? Let us know by sending your comments.