For some time now we’ve been following the progress of Samsung’s flexible AMOLED displays dubbed Youm. We were hoping to have seen these new screens used by now and at one time it seemed possible they may appear on the new Samsung Galaxy Note 2 (Note II). However this didn’t come to fruition and it now appears that these flexible AMOLED displays have now been delayed. You never know though, they may finally make a debut on the Galaxy Note 3 or Galaxy S4.

Samsung originally planned the YOUM flexible displays to arrive in Q3 this year but it has now been reported that the mass production has met with a problem. In a way though this isn’t an issue for Samsung as its regular glass AMOLED displays are still proving extremely popular and sales of these hasn’t slowed, hence the delay of the flexible displays. The Galaxy S3 has been a phenomenal hit for Samsung and uses a 4.8-inch Super AMOLED HD display with a 5.5-inch version also following to the Galaxy Note 2. Indeed rather than production of these AMOLED displays being reduced, Samsung has actually increased it instead to keep up with demand.

Slash Gear, sourced from ETNews, reports that Samsung plans to increase AMOLED substrate production from 56,000 units monthly to 64,000 monthly and that the glass AMOLED displays will now use lines that were scheduled to be used for the flexible displays. Although there’s no scheduled timeframe known yet for the appearance of the flexible displays it looks as though they may not come until 2013. 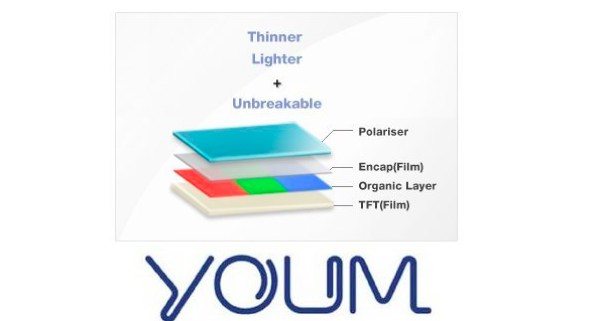 The new flexible AMOLED displays use plastic rather than glass substrates thereby allowing the flexibility, which would enable their use in all sorts of forms. It might even be possible that rather than just be used within smartphones or tablets the display could stretch beyond the edges of a device so that a top panel might be used, as a status screen for example, so that users could quickly check without even having to take the phone right out of their pocket or bag.

We are certainly intrigued to hear more about these flexible AMOLED displays by Samsung and while it’s good news that the glass AMOLEDs display are still highly desired we’re interested in seeing exactly what the flexible ones will offer. While they didn’t turn up in time for the this year’s Samsung flagship devices it certainly doesn’t seem to beyond the realms of possibility that they might be included on next year’s Galaxy S4 or Galaxy Note 4 and we’d like to know if this is something that potential customers would like to see.

Is a flexible display something that you’d love to see included on your next device or would you just as happily stick with the traditional glass AMOLED display? Let us know with your comments.