It has been around a month now since Google treated the Android world to some new Nexus branded hardware that included the hugely popular Nexus 4 smartphone manufactured by LG. The popularity of the handset with its competitive pricing and high end specs has seen the device becoming hard to get hold of from certain channels, and especially Google Play. It now seems that stock via this method has been exhausted again with no word when it will be available.

As soon as Google first launched the Nexus 4 onto the Google Play Store both storage versions of the device quickly sold out, and when pre-orders then started again for the device consumers were left with rather long wait times for their handset to arrive.

Now at the time of writing both the 8GB and 16GB versions of the Nexus 4 have sold out in the US and UK Google Play Stores. The 8GB model was the first to sell out recently but has now been joined by the 16GB model and just before this the shipping time for the device was showing up to a nine week wait time. 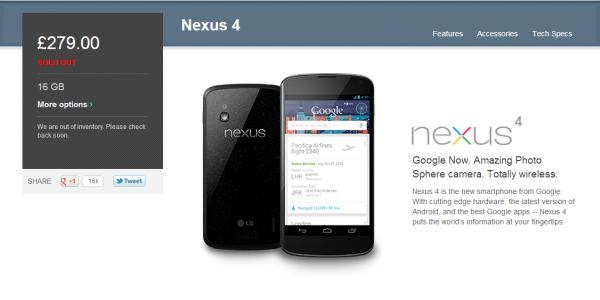 LG has spoken about the stock shortages of the Nexus 4 recently and basically said it was down to the huge demand, but those desperate to get hold of the device can decide to purchase it from a number of carriers or third party retailers.

Trouble is though this is a much more expensive option as for instance the US Amazon online store has the 8GB nexus 4 listed at a massive $559.99, which compares to $299 via Google Play when there is stock. OK Google will charge you for delivery of your handset but that’s a big difference in price for the same product.

For those of you that were lucky enough to recently get an order accepted by Google for the Nexus 4 it could be almost February before you even see your device. For UK consumers the handset is now available via carrier Three, which first revealed some pricing for the handset last month, but at the time of writing the only option available is getting the device on the One Plan over two years at Â£35 per month, and a Â£29 up front cost for the 16GB model.

If stock issues are not quickly resolved many potential buyers of the Nexus 4 may look elsewhere, as next month we have the CES event in Las Vegas that is followed in February by the Mobile World Congress, and we are likely to see a whole host of desirable new hardware being announced.

Have you managed to get hold of the Nexus 4 via Google Play?