Old Sammy keeps on extending their popular Galaxy range of smartphones, and the Korean company has now added yet another handset to that range by unveiling the Samsung Galaxy Grand. An Android device that will become available in two versions, the dual SIM GT-I9082 will launch first and then will be followed by the single SIM GT-I9080 model at some point after.

According to a report by Samsung Tomorrow, Samsung is sticking with the popular 5-inch size with the Galaxy Grand as the device sports a 5-inch WVGA TFT touch screen along with using multiple apps simultaneously without switching screens by using the Multi Window feature. 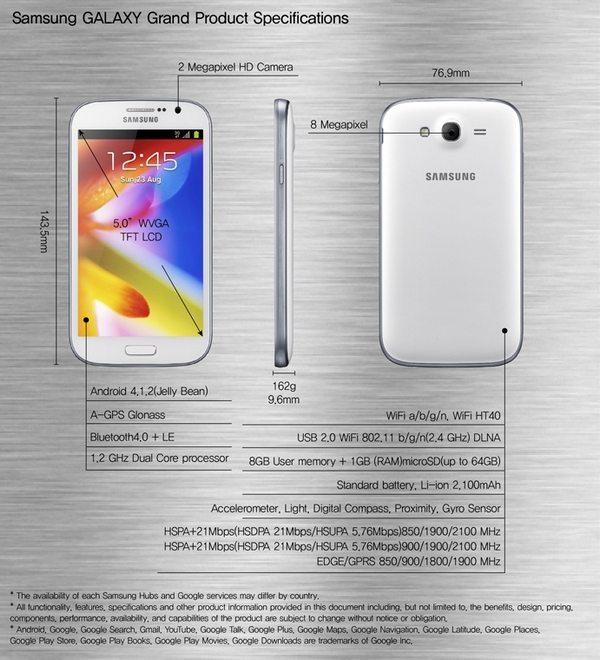 The Android handset comes packing such features as Direct Call, a feature that enables the user to dial a call simply by raising the device to their ear, and the ability to shake the handset to trigger status updates or pan and zoom into a screen. The handset also has a Smart Alert feature that will show missed events like missed new messages and calls when you pick up the device, whilst the Popup Video feature allows the user to view videos in a pop-up windows anywhere on the display whilst running other tasks.

S Voice is also on the Samsung Galaxy Grand so you can control the handset with your voice, whilst AllShare Play is also there enabling the user to share content across Sammy devices using a single account, and the smartphone also comes with the latest versions of Samsung Hubs pre-installed such as music, movies and games.

Size wise the Samsung Galaxy Grand measures 143.5 x 76.9 x 9.6mm with a weight of 162 grams and sports a 2100mAh Li-ion battery along with all the usual Google services such as Google Play, Gmail, Google Talk and the like.

However as for just when the Samsung Galaxy Grand is likely to release or where, and how much the Jelly Bean handset will command, Samsung hasn’t yet delivered that important piece of information.

So there you have it, what do our reader think of this new Jelly Bean smartphone from the Samsung camp, is the Galaxy Grand a handset you would like to own?