If you happen to use the New York City subway quite often, and require information about train arrivals, as long as you own an iOS device there is the MTA Subway Time app for iOS that was released a while ago by the Metropolitan Transit Authority, and although this app hasn’t officially come to the Android platform there is an alternative app available.

The MTA Subway Time app for the iPhone, iPod Touch and Apple iPad delivers real time train arrival info for selected routes of the New York City subway enabling the user to know exactly when your train will arrive, and just how far away the train is to your stop.

The MTA Subway Time iOS app apparently covers six of the numbered subway lines, lines from 1 up to 6 along with the 42 Street shuttle and thus covering some 156 different stations in the city, and uses the countdown clocks that are linked to central computers that have been placed on 7 of the city’s 24 lines. 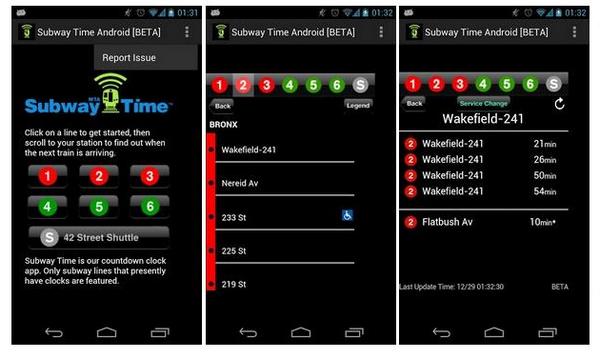 However as the MTA have left the Android faithful a bit out in the cold with the MTA Subway Time app, Android developers used the agency’s operations data to create an alternative application for the Android platform.

The Android version was created by designer Elad Katz and took just 24-hours to create the replicated application.

So for those iOS faithful in New York City that use the subway and haven’t yet downloaded the MTA Subway Time app you can grab it from iTunes as a free download, and if you are on Android you can download the Android version to your device for free by heading over to Google Play.

Are any of our iOS or Android readers using either of these apps to get real time train arrival info on the New York City subway and if so is the app working well for you?