While Apple fans continue to drool over the new iPhone 5, Android enthusiasts are still enjoying the many features of the phone that is the iPhone’s major rival and that is the popular and very much-loved Samsung’s Galaxy S3. Looking at things a little closer we know that both have very different operating systems, but nevertheless in some ways both handsets have some attributes in common. We will not go too deep into this as we would not want to send you off to sleep, so here is a little take on both devices, please do have a read and let us know if you prefer the iPhone 5 or the Samsung Galaxy S3.

iPhone 5
Since it was launched in September, the iPhone 5 has proved to be massively popular. The phone is lighter than previous iPhones at 112g and has a four-inch screen. It comes in white as well as black, both of which have a two-tone effect on the backplate. The iPhone 5 has a more advanced form of antenna, meaning it should be nearly impossible to lose a signal. It generally increases the power of GPS lock-on and also improves the call connection.

The headphone jack is now located on the bottom of the phone and a new Lightning port has been added, plus the phone is thinner and more compact than its predecessors. The iPhone functions over 2G, 3G and 4G networks and has Wi-Fi, Bluetooth and USB capability. The primary camera is 8MP and the secondary 1.2MP, and the phone can record video and images simultaneously. 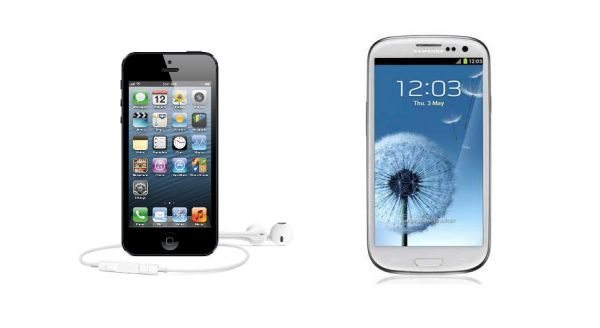 Samsung Galaxy S3
Much admired since its release in May, the Samsung Galaxy S3 has been the top selling smartphone until now, with 10 million handsets sold in less than two months. This is also a thinner and reasonably lightweight phone at 131g, however the casing has a somewhat plastic feel. Samsung Galaxy S3 has a larger screen than the iPhone at 4.8 inches. It comes in either grey or black and supports SD cards; users can output HD content to a television set via an HDMI cable.

Samsung Galaxy S3 functions over 2G, 3G and 4G networks and has Wi-Fi, Bluetooth, and NFC and USB capability. The primary camera is 8MP and the secondary 1.9MP, and the phone can record video and images simultaneously.

Key differences
The iPhone 5 is lighter and slimmer than the Samsung Gallery S3, however, it has a smaller display area, although the resolution is higher quality at 326 ppi compared to Samsung’s 306 ppi. The Samsung Galaxy S3 is not as comfortable in the hand as the iPhone 5, although it has particularly good battery life with up to 16 hours talk time compared with the iPhone 5, which offers up to 8 hours talk time.

One important difference between Samsung phones and iPhones generally is that people who have bought earlier iPhone versions, such as an iPhone 4 or 4S, can use iPhone 4 unlock to search for better network deals, to save mobile roaming rates when abroad, or simply to insert a different sim card in their handset.

Fit for purpose
Both phones have natural language commands and dictation, active noise cancellation with a dedicated microphone, TV-out capacity, voice memo/dial/commands and a good selection of apps. Samsung Galaxy S3 may be particularly suitable for work use as it features Dropbox (50 GB storage), Document viewer (Word, Excel, PowerPoint, PDF), Calendar plus Google Search, Maps and Gmail. The Apple iPhone 5 may be a better bet for social networking as it has Twitter and Facebook integration and good storage capabilities via the iCloud cloud service. The iPhone 5 Maps feature, however, has failed to impress and Apple have promised a complete overhaul of the map software.

We use the iPhone 5 and Galaxy S3 and we love both of them and cannot sit here and choose one over the other, can you?

8 thoughts on “Galaxy S3 vs iPhone 5 and Key Differences”