At the beginning of December we told readers about an upcoming Asus 7-inch tablet that looked as though it was heading for a January release. That tablet, titled the MeMO Pad has now been officially announced by Asus and we have full details of this budget slate that is a Nexus 7 lookalike. The Nexus 7 has been hugely popular and no doubt Asus hopes that some of that attraction will rub off for its MeMO. However specs-wise it doesn’t really compare although the price of the MeMO will certainly appeal.

This tablet is really aimed at customers in emerging markets so specs are definitely at the lower-end but then this is reflected in the very affordable starting price tag of $149 for the 8GB model. However before we give the usual specs we’ll point out that when we first detailed the MeMO Pad we informed it would be running on Android ICS whereas in fact the newly-announced MeMO Pad will actually be running the later Android 4.1 Jelly Bean operating system, a welcome move.

Key specs and features for the MeMO Pad include a 1GHz VIA WM8950 processor with Mali 400 graphics and also a 7-inch LED-backlit display with resolution of 1024 x 600 (which can only be described as low) with 140 degree wide viewing angles and 350-nits brightness. It has 1GB of RAM, 8 or 16GB of internal storage, expandable via microSD card to 32GB, and also comes with 5GB of free Asus WebStorage. Don’t get too excited about the camera either as it has a 1-megapixel front-facing camera with back-illuminated sensor and 720p HD video capture at 30fps. 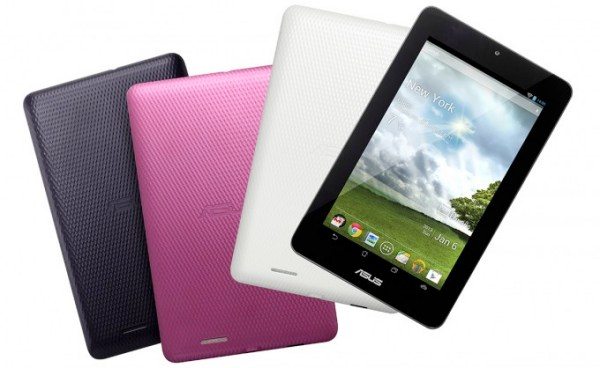 Other inclusions are Wi-Fi 802.11b/g/n and a 4270mAh battery that will give around 7 hours of use while for connectivity there’s a 3.5mm headphone/mic, microphone, micro-USB port and also G-Sensor. Pre-installed ASUS apps include SuperNote Lite, WebStorage, WebStorage Online Office, Studio, BuddyBuzz, MyPainter and MyBitCast. As for dimensions the MeMO Pad measures 196.2mm x 119.2mm x 11.2mm and it weighs in at 370g. Color options are Sugar White, Titanium Gray and Cherry Pink and it actually looks good, as well as having an attractive diamond-patterned non-slip finish.

Unlike the Asus Transformer Pad tablets the MeMO Pad is a tablet-only device and hence there is no accompanying dock. Asus has not supplied details yet for a specific release date, carriers or regional availability, but does say that the MeMO pad will be launched this month. We’d like to hear your thoughts on the MeMO Pad so why not send us your comments. Do you think the specs are fair enough for the price?