Despite offering users some great games smartphone applications can also help people in their everyday lives as well with a whole number of different offerings. Today we have news of a NYPD iOS application that features breaking news and lending a helping hand in fighting crime.

The application was released to the Apple App Store right at the end of last year and offers residents of New York City a number of useful features in the fight against crime. These include a photo gallery of people wanted in the city for various crimes, and there is even breaking news provided to the application.

Users can even submit anonymous crime tips to the app in the battle to make the city a safer a more crime free place. The application has been provided to iOS users to help the New York City Police Department deliver on its goal of enhancing the quality of life for residents of the city, as it tries to up hold the laws, lower fear, provide a safer environment, and preserve the peace. 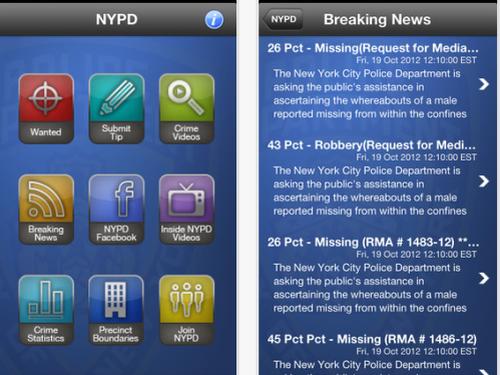 There are also a number of useful contact numbers for a number of local emergency services with directions to the closest police precinct, and the breaking news is provided by push notifications. There is also talk that an Android version will be released in the next couple of months, but NYPD for iOS is available free from the App Store for owners of the iPhone, iPad, and iPod Touch running iOS 5.1 or later.