Japanese mobile carrier NTT DoCoMo have been busy unveiling a whole host of new devices that will becoming available in the coming few months, which a number of carriers in the western world could take a similar stance to please their customers instead of being drip fed the odd leak leading up to an announcement of a single device. We are now looking at the Fujitsu Arrows X F-02E, Sharp Aquos Phone EX, and Huawei dtab.

We told you earlier that the Japanese carrier had revealed the LG Optimus G Pro, but the company has revealed a total of twelve upcoming devices that also include some cheaper options and tablet PCs.

The Huawei dtab is 10-inch device made in China that won’t be breaking any barriers with regards to specifications. The display offers a resolution of 1280 x 800 powered by the company’s own quad core K3V2T processor clocked at 1.2GHz. There is a 6,020 mAh battery with the device measuring 9.9mm thick and is expected to be released in March.

Meanwhile the Fujitsu ARROWS X F-02E is not known that much outside of the region, but features a 5-inch 1080p LCD touchscreen. Under the hood is the Nvidia 3 quad core processor clocked at 1.7GHz, and the camera uses a massive sixteen megapixel sensor that is powered by a 2,420 mAh battery with the handset set to be available sometime next month.

The Sharp Aquos Phone EX is another worthy smartphone offering that has a 4.5-inch 720p touchscreen display, while under the hood is a quad core Snapdragon S4 Pro processor clocked at 1.5GHz. There is also an impressive 2GB of RAM with 16GB of on board storage and a thirteen megapixel rear facing camera running the Android 4.1 Jelly Bean operating system. This is expected to be available from January 25th.

Other devices announced by the carrier include the Huawei Ascend D2 but with a smaller 4.7-inch display, Sony Xperia Z, and the Panasonic Eluga X among a few others. 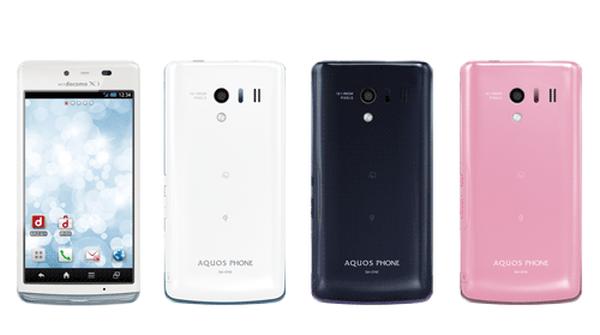