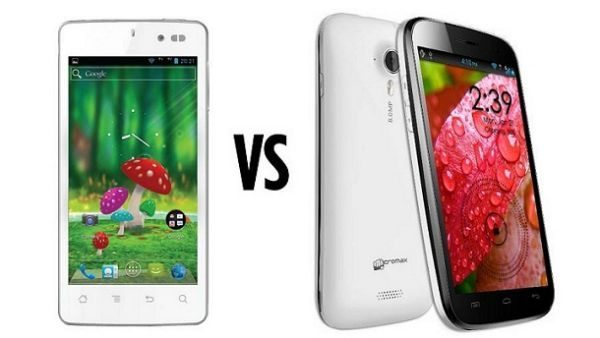 There are two new smartphones that were announced recently that we believe can take on each other in a fair specs game, we will discuss a little about each device and then leave it up to you what you would prefer. This is the Karbonn S1 Titanium vs Micromax A116 Canvas HD. Those of you that reside in India, what will you be choosing?

We believe the Karbonn Karbonn S1 Titanium is ready to go up against the Micromax A116 Canvas HD, when it comes to the specifications there is not a lot in it. Both smartphones run Android Jelly Bean 4.1 and powered by Quad-core 1.2 GHz, they also have 1 GB RAM, so far the same on both devices.

When it comes to the camera side of things the Karbonn S1 Titanium boasts a 4.5-inch display at 960 x 540 pixels resolution and the A116 Canvas HD has a larger 5-inch capacitive touchscreen with 1280 x 720 pixels (HD) resolution so in the sense of the camera the Canvas has this in the bag.

Phones Review Say’s: The Micromax A116 Canvas HD in our minds beats the Karbonn S1 Titanium by a fraction when it comes to specs, it is a matter of what brand you prefer.