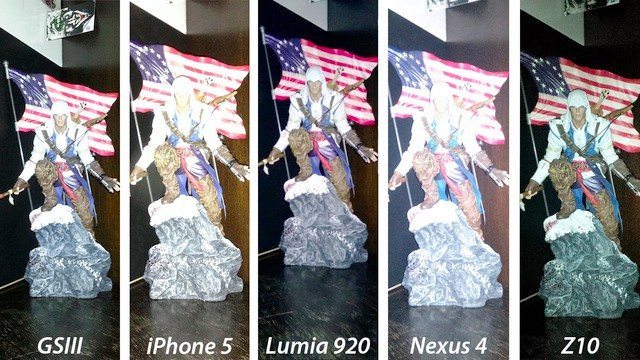 One thing that many of us are increasingly using our smartphones for is photography and so we are making more demands and expecting more from the cameras on our devices. Today we have news of a comparison of the top 5 available smartphones on various platforms in a 2013 camera shootout. You may, or not be surprised by the winner from the following 5 phones, the BlackBerry Z10, Apple iPhone 5, LG Nexus 4, Nokia Lumia 920 and Samsung Galaxy S3.

These are all in-demand flagship devices covering a range of operating system platforms so it’s a pretty even spread of smartphones being used for the test. No doubt there will be even more impressive camera set-ups on phones announced at MWC later this month but all of these ones are currently for sale. The camera abilities of each of these 5 phones were tested under various conditions in the same controlled environments, from the same position.

In daylight with the sun shining the Lumia 920 again fared well, taking top position with no lens flare at all. The iPhone 5 came next best. Finally we come to indoor portrait shots and this time the Android Samsung Galaxy S3 took the best image followed by the Lumia 920. In all of the above test shots the Nexus 4 running Android Jelly Bean gave a pretty poor performance. So which of the phones was judged to be the overall winner in this test conducted by Gizmodo?

In first place overall was the Nokia Lumia 920 with accurate exposure and decent images being praised. Second was the iPhone 5, said to perform “reasonably well,” while third spot went to the BlackBerry Z10, a nice coup for BlackBerry and this recently released BB10 phone. Fourth was the Galaxy S3 although a good point is made when we’re reminded that this is the oldest of all the phones tested, so coming fourth is certainly no shame. Finally bringing up the rear is Google’s Nexus 4 phone, described as “incredibly disappointing.” Readers may be interested though in an article we posted yesterday about Google’s commitment to improving Nexus device cameras, hopefully in time for the Nexus 5.

You can see some of the photos used for the test above but all of them are available to view at the source link below. This is certainly an interesting assessment although we’re not quite sure we agree that the Lumia 920 performed the best in the daylight shots. Regardless of this though, the Lumia 920 certainly does appear to have the edge as an all-round performer.

We’d like to know what you think of this camera test and whether you agree with the separate verdicts and overall conclusion? Send your comments to us about this.