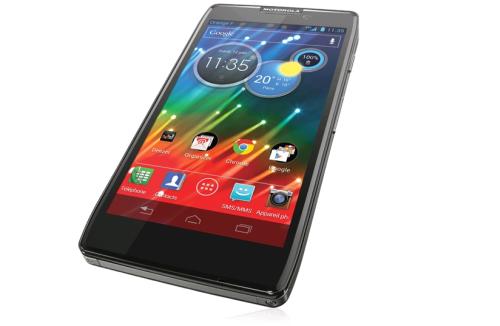 The Motorola RAZR HD besides its large battery also has 4.7-inch Super AMOLED capacitive touchscreen display with a resolution 720 x 1280 and 312ppi pixel density. This is powered by dual core processor clocked 1.5GHz and coupled with 1GB of RAM, and the handset has 4G connectivity as well as Android 4.1 Jelly Bean straight out of the box.

Motorola is boasting of the handsets impressive battery life claiming users can get up to twenty hours of talk time from a single charge, but this is seemingly less than the US version of the handset. Other specifications include an 8 megapixel rear facing camera, 1.3 megapixel unit on the front, 16GB of on board storage that is expandable by a further 32GB via microSD card, Wi-Fi, Bluetooth 4.0, and USB 2.0 connectivity.

The handset measures in at 67.9mm x 131.9mm x 8.4mm weighing in at 146 grams despite packing in that 2,530 mAh battery. A number of retailers have put the device up for order with immediate dispatch, and on Expansys the handset can be yours for Â£419.99 SIM free and including delivery.

While rival retailer Clove has the handset priced at a cheaper Â£396 including VAT with a chance of winning some Virgin Azure Experiences if you order the handset before the 31st of March. It remains to be seen how many consumers will go for the RAZR HD now considering the hardware that is just becoming available or is in the pipeline.

Will you get the Motorola RAZR HD?