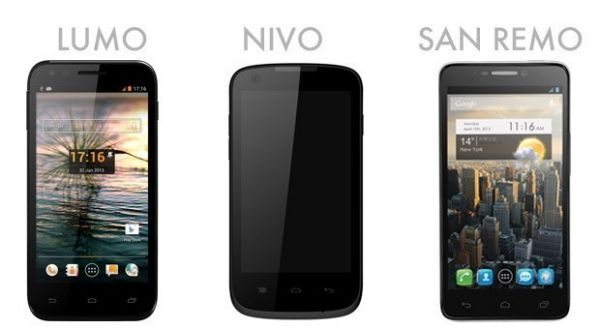 Orange has just revealed 3 new branded smartphones for the European footprint; the names of these Android Jelly Bean handsets are a little weird such as the Nivo, San Remo, and Lumo. The one they call the Lumo sounds a little similar to the Lumia, will these new phones bring best value and rich user experience to customers?

The Orange own-brand device range has grown steadily in recent years to make up a significant proportion of overall Orange phone sales. Today, Orange is building on that success and aggressively developing its smartphone portfolio. With Orange smartphone sales growing by 62% and market share growing by 77% in 2012, Orange smartphones represent the fastest growing range of devices within our portfolio by market share growth.

“All of our customers around the world, from Bordeaux to Bucharest, are hungry for sophisticated yet affordable mobile phones that allow them to reap the benefits of the mobile internet,” said Yves Maitre, Senior Vice President of Mobile Multimedia and Devices, Orange. “The growth of our portfolio and, most importantly, the response from our customers, shows that our strategy is resonating in the highly competitive smartphone market that we’re operating in today.”

In Spain, the Orange Monte Carlo was the top selling phone throughout 2012, and Orange’s devices made the top 10 in the UK, France and Romania with the Orange Dallas and Orange Sydney. The success of these phones illustrates the fact that customers are seeking options in addition to the wide range of phones sold by Orange from traditional device manufacturers.

Orange Lumo is the first ever 4G Orange Smartphone, with super-fast LTE connection speeds, 4.5” screen, 8MP camera, and running Android 4.1 (Jelly Bean). The next phone is the Orange San Remo that features a 4.7-inch display, Android 4.1(Jelly Bean), 8MP camera and only 8.2mm thick and the last phone is called Orange Nivo featuring a 4-inch display, also Android JB and a 5MP camera.

“Orange’s strategy of selling its own branded devices at affordable prices sets a very good benchmark for all industry players,” said Francisco Jeronimo, Research Director, European Mobile Devices, IDC. “When consumers’ needs are thoroughly understood, there is still room in the market to create value in all segments. These three new smartphones show Orange’s strong commitment to innovation and will provide customers with a differentiated experience.”

The smartphones will be launching from H1 across a number of Orange markets including Romania, Slovakia and Spain (not all countries will carry all three devices). Pricing will be announced with local availability, but will be in line with previous Orange smartphone pricing and tariffs. All three devices will be on display at Mobile World Congress 2013, and can be seen at the Orange booth Hall 5 Stand 5H110.

Please do let us know if you prefer the Orange Nivo, San Remo or Lumo?