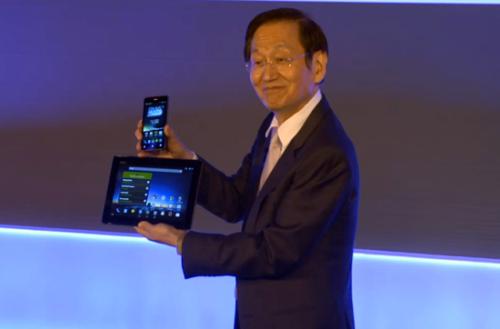 Asus has already brought us the PadFone one and two but today at the Mobile World Congress, the company has raised the bar with the new Asus PadFone Infinity that has just been revealed, along with its availability and price.

The company has just taken the wraps of its latest PadFone that is now called the Infinity, which is the latest phone-tablet hybrid docking device from Asus. This time we are treated to a smartphone with a Full HD 5-inch display with 441ppi and uses an anti-fingerprint coating, which is powered by the Qualcomm quad core Snapdragon 600 processor that is clocked at 1.7GHz.

This is paired with 2GB of RAM along with either 32GB or 64GB of storage along with a 13-megapixel rear facing camera and a 2-megapixel front facer, which is housed into a unibody brushed aluminium frame, and the logo on the back of device doubles as the antenna.

Connectivity wise it supports 42mbps HSPA+ and 100mbps LTE radios along with the latest 802.11ac Wi-Fi, and the handset will come running the Android 4.2 Jelly Bean operating system, with the company designing the handset with curves to make it more comfortable to hold.

The Infinity Station has a 10.1-inch 1920 x 1200 Super IPS display with 400 Nits brightness, regarding availability Asus has said the PadFone Infinity will release in April and priced at â‚¬999 or Â£799 in the UK, but unfortunately it’s not expected to reach US shores, which seems a bit of a mistake by the company.