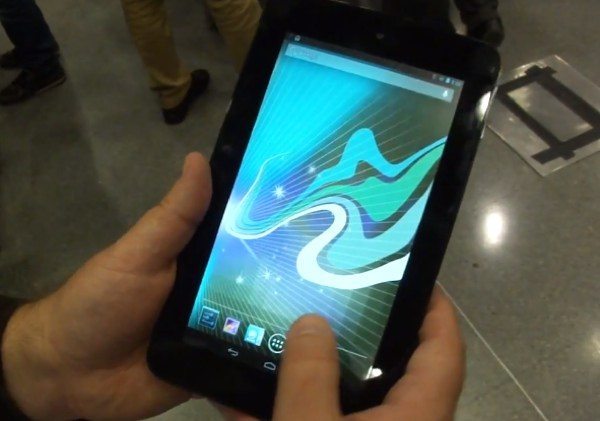 The HP Slate 7 Android tablet has officially been revealed at Mobile World Congress 2013 and if you’re after a decent-looking affordable tablet with specs to match then this could be the device for you. The Slate 7 is due out in April and we have plenty of information for you to digest as well as a hands-on video look that you can view, although the reviewer sounds less than impressed.

The Slate 7 is due to be released in the US in April so there’s not too much longer to wait and the price is $169, a very attractive selling point. It’s powered by a 1.6GHz dual-core Cortex A9 processor, has a 7-inch display with resolution of 1024 x 600, 1GB of RAM and 8GB of internal storage, expandable via microSD.

Other specs include a 3-megapixel rear camera, VGA front-facing camera and Beats Audio and it’s very lightweight, weighing in at only 13 oz. The HP Slate 7 will run stock Android 4.1 Jelly Bean and that will also please many customers. Although that’s not the very latest Android update it’s pretty good considering the price of the device. However it has to be said that overall the specs are low-end so befit the price.

The build is a stainless steel frame and HP’s press release tells us it comes in a soft-touch finish and comes in grey or red on the reverse. You can also see a hands-on look at the Slate 7 from a YouTube video that we’ve embedded below this story. You may also be interested in our earlier article about another tablet just made official at MWC, the Sony Xperia Z tablet.

Okay, so this is an affordable tablet with modest specs but it does actually look quite decent. We’d like to hear your comments on this though. Is the price low enough to tempt you to purchase the HP Slate 7? Maybe there are too many other low-end tablets available at equally affordable prices that you think the Slate 7 could be lost among them?

One thought on “HP Slate 7 Android JB tablet, affordable with specs to match”