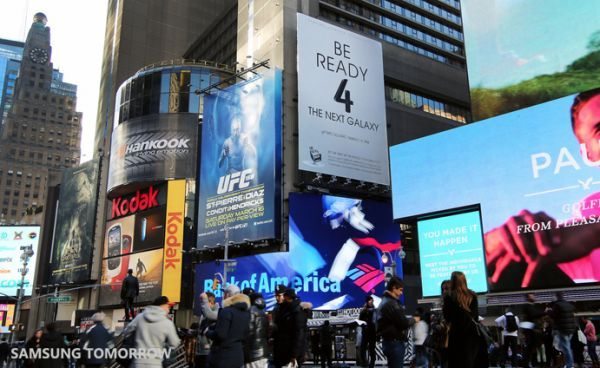 Three new Mobile Unpacked 2013 posters have been put up around Times Square, New York and the ‘Be Ready 4 The Next Galaxy’ event is no doubt going to unveil the new Galaxy S4. Just over a week to go and March 14th will be one of the most memorable days of the year for Android fans around the world.

If you look at the ‘Be Ready 4 The Next Galaxy’ poster above you will notice it is right next to the UFC one and this is fitting and hilarious in a way considering Samsung is a close rival of Apple, we all know too well that the Galaxy S4 is going to be bigger news than the next iPhone aka what will be the iPhone 5S.

This is the one day you do not want to miss, stay close with Phones Review on March 14th because we will reveal all and publish all the news you need.

The three photos over on Samsung Tomorrow proves that Samsung is going all out to give you the best announcements of the year, but it is the picture above that strikes us. If the Samsung Galaxy S4 is announced this will definitely be an ‘Ultimate Fighting Championship’ with Apple, as they will no doubt only release a mediocre iPhone 5 refresh.