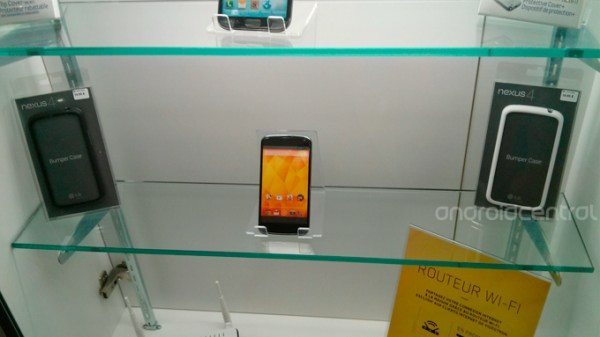 The Nexus 4 is an extremely popular Android smartphone and almost since its release last year we’ve been hearing rumblings that it may become available as a white color option as well as the black version currently available. The mystery of the Nexus 4 in white is still ongoing and we’ve been documenting the saga, which takes a new twist today as a white bumper case for the Nexus 4 has now been spotted in the flesh.

We’ll give you a brief recap of the story so far. In November a white version of the Nexus 4 smartphone briefly made a listed appearance on a UK retailer product page. We then saw a phone operator list a Nexus 4 White bundle and then saw a leaked photo claiming to be the Nexus 4 in white, although there was no way of verifying this. Despite all of these ‘sightings’ the Nexus 4 white version of the handset never actually turned up available for sale.

Following this though we told last month how a Nexus 4 bumper case in white had now been listed on a Canadian retailer website and even had a price of $24.99 listed. It seemed to us highly unlikely that a white bumper case would become available for the Nexus 4 if it was only to stay available in the black color option and also as accessories sometimes appear before the actual device it looked quite promising that a white Nexus 4 was now on the way.

The Nexus 4 white bumper appears next to a black bumper at a Videotron, Montreal store and is priced at $19.95 so we at last have authentication that the white bumper for the Nexus 4 is real. Of course this doesn’t prove a Nexus 4 in white will also become available but the idea of a white bumper on a black Nexus 4 still seems an odd idea to us, unless that’s just us?

We’d really like to hear your thoughts on this. Are you hoping the white bumper for the Nexus 4 comes to other outlets? Do you, like us, feel this indicates a white Nexus 4 handset is likely at some point? Maybe you feel it’s unlikely that another Nexus 4 color option will arrive now and that a white Nexus 4 will always be elusive? Let us have your comments on this.