HTC One vs Google Nexus 4 geeky video shows all 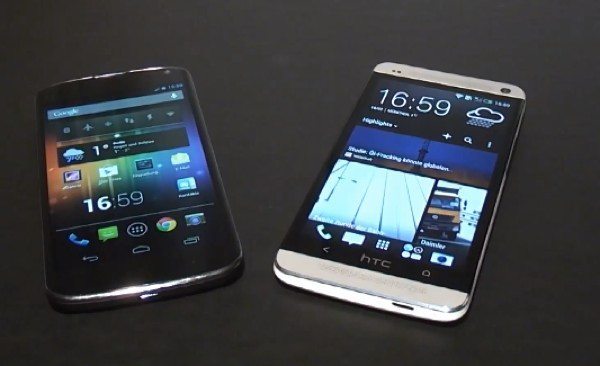 At Phones Review we enjoy bringing you the odd phone comparison between some of the most high-profile smartphones of the moment. Sometimes we come across a video comparison and these can be extremely useful as it can be beneficial to see the devices concerned while they’re being compared. With this in mind today we have an HTC One vs. Google Nexus 4 video for you to view that will give you a good idea of what these two phones have to offer.

The Nexus 4 has been available for several months now while the HTC One is shortly to release. While the Nexus 4 is a competitively priced phone that offers a pure vanilla Google Android experience, the HTC One is a flagship device from HTC and is a tremendously impressive smartphone, both in specs and design. We’ve previously given readers our own comparison of these two phones (check here for that) with plenty of specs and details to digest. Before we get to today’s 11-minute video comparison we’ll recap just a few of the major specs for each device.

Firstly the HTC One has a 1.7GHz Qualcomm Snapdragon 600 quad-core processor, a 4.7-inch full HD display with 469ppi, 2GB of RAM and 32 or 64GB of internal memory (non-expandable). It also has a 4-megapixel rear camera but before you think this is inferior we should point out that it’s an UltraPixel camera that gets the best out of low-light photography. There’s also a 2.1-megapixel front-facing camera and it runs on Android 4.1.2 Jelly Bean, upgradable to 4.2.2 with HTC Sense 5.0.

Next the Google Nexus 4 made by LG and this has a 1.5GHz Qualcomm Snapdragon quad-core processor, 4.7-inch display with 1280 x 720 resolution and 318 ppi, 2GB of RAM and 8 or 16GB of internal storage (non-expandable). It also has an 8-megapixel rear camera and 1.3-megapixel front-facing camera and runs on Android 4.2 Jelly Bean, upgradable to 4.2.2.

Now onto the Mobile Geeks YouTube video that you can see below this story, which is pretty comprehensive and shows the two phones side-by-side. The video runs through the hardware, looks at the designs and form factors, takes a good look at the camera set-ups and then the displays and batteries. Quadrant benchmarks are also run where the HTC One seems to be quite a lot faster.

When you’ve watched the video comparison of the HTC One vs. Google Nexus 4 why not let us know what you think. Would your choice be the One or the Nexus 4?