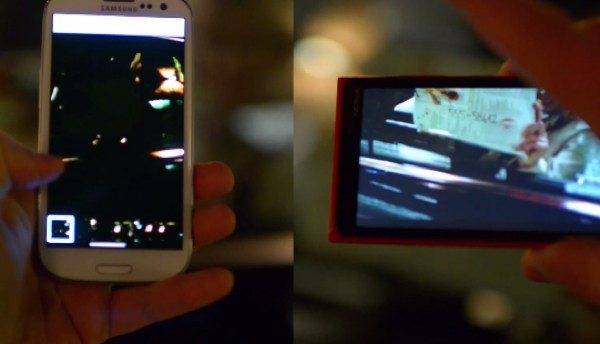 On the face of it then there shouldn’t be too much difference between video recording on the Lumia 920 and the Galaxy S3 but that doesn’t take into account Nokia’s PureView technology. You can see the one-minute video below this story and although it looks as though it’s a Galaxy S3 in the video it could even be the Galaxy S4 as they are so similar. Nokia chose the day of the Galaxy S4 official reveal event last week (surprise!) to post this video and as you might expect it does show the superior ability of the Lumia 920 as far as video capture in low-light conditions is concerned.

Nokia claims in the YouTube video notes that its advanced floating touch technology enables the PureView camera of its Lumia 920 to absorb five times the amount of light of other smartphones without using flash and this is what makes night-time videos and pictures so impressive. You can see the Nokia video below this story.

We’d like to hear your thoughts on the video and differences in video quality between the Lumia 920 and the assumed Galaxy S3? Let us know by sending your comments.