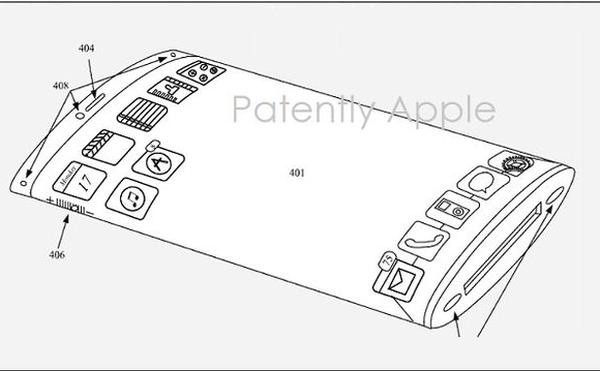 In the past Apple has always been renowned for its innovative designs and features for a number of its products, which of course also includes its smartphones. While some may think this is a thing of the past now a new Apple Patent hints at a stunning display possibility for the iPhone 6.

Apple often gets new patents approved that never seem to see the light of day, but a new one has emerged that could really change the face of the iPhone quite literally. A couple of days ago the company applied to get a patent approved that features a smartphone with a stunning looking wrap around display.

Many Android fans poke fun at their iPhone owning friends regarding the screen size of the handset, but if this new technology ever becomes available on an actual device it will certainly give the competition something to think about.

The patent shows a handset with a display on the front and the back of the handset, and also that there is room for 5 icons on the dock and across the home screen. It seems the home button has been removed along with virtual controls for the volume placed where the two screens meet.

It also uses two flexible displays on one device and would allow users to show content separately or as one, so you could watch content on one display while showing something else on the other. The patent also allows users the ability to show images or videos in a continuous loop, and could even display 3D content.

There has been talk of flexible smartphone displays for a while now but these are not ready for general release yet, but they could be flexible enough to have the screen curved on a device like this. The patent also shows that Apple could use either aluminium or some sort of transparent glass for the chassis of the iPhone.

Having an all glass display may cause issues if the device is dropped but a stronger glass is already on its way that is much stronger than what we use now, and is already used on the camera lens of the iPhone 5.

The iPhone 6 is not expected to be released until sometime next year, and that may be enough time for Apple to perfect this technology and produce it at an affordable enough price for the mass market.

Do you like the idea of a wrap around display on a smartphone?