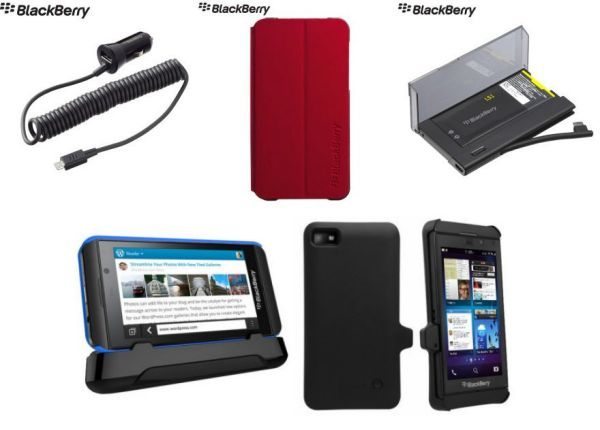 The BlackBerry Z10 is doing well, with news coming this week that one million units of the new phone have been sold so far. In celebration of that achievement, we will be bringing you five of the best Z10 accessories to hit the market so far. Let’s get started.

5. BlackBerry Premium 1.8A MicroUSB Car Charger
If you’re going to hit the road with the Z10 and make use of the much-improved GPS navigation functionality, you’ll want to ensure that the phone’s sometimes limiting battery won’t hold you back. For this problem, I recommend the BlackBerry Premium Car Charger, which provides the full 1.8 Amps needed to charge the phone at full speed. This ensures that you’ll always arrive at your destination with more battery than you started with, instead of less.

4. BlackBerry Z10 Flip Shell
This genuine BlackBerry product is a clever cover for the Z10, and it works similarly to Apple’s Smart Cover. A fold in the middle allows the cover to be turned into a convenient stand when it isn’t protecting the screen. When the phone isn’t in use, you’ll benefit from an impact-resistant plastic cladding and that very same cover protecting the screen from being scratched or shattered.

3. BlackBerry Z10 Battery and Charging Bundle
If you don’t feel like strapping on an extended battery case, a good alternative is this charging bundle, which provides both a spare battery and the means to charge it in a protective case. The charger can also refill your Z10’s reserves at the same time, making this a highly efficient way of keeping topped up.

2. Cover-Mate Desktop Cradle
This cradle is one of the nicest we’ve seen so far for the BlackBerry Z10, allowing the Z10 to be synced and charged with ease. The Cradle also works as a desk stand for the Z10, operating in a landscape orientation in order to make watching YouTube videos, playing games or just keeping an eye on incoming BBMs easier.

1. 3000mAh Extended Battery Case
This case is the newest on the Mobile Fun list, and also perhaps the most interesting. It’s a combination case and extended battery, which adds an extra 3000 mAh of battery capacity. That’ll almost triple the amount of overall battery life you’ll get out of the phone, shoring up one of the Z10’s biggest weaknesses. The bulk of the extended battery is minimised as much as possible, and of course pulls double duty as protection from the phone as well. All in all, a clever case that will allow you to experience the new BB10 OS with the legendary battery life of older Blackberries’.

Conclusion
And there we have it – five excellent accessories for the BlackBerry Z10. Be sure to let us know what you think of the selections, and feel free to share your own below! Thanks for reading and have a good one!