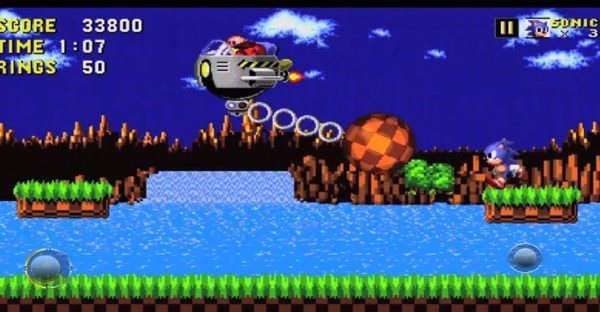 As well as new smartphones and tablets we like to keep readers informed about new apps, some practical and others for entertainment. The big news today regards the original Sonic the Hedgehog game from Sega, which has been remastered for a brand new Android app. What’s even more exciting for some of us who were around back in the day of the original Sonic is that there’s not too much longer to wait as the app will be here this month and we also have a gameplay video for you to view.

Ahh, not to give too much away about my age but my heart skipped a beat recalling how much fun I had with my Sega and the original Sonic the Hedgehog game. We thought then that this was the height of what gaming technology would ever offer but how wrong we were! It’s a great idea then to bring the original Sonic the Hedgehog back for gamers of today to enjoy for the first time and for us older gamers to enjoy once again.

Sega announced the Sonic for Android app yesterday at GDC 2013 and the idea of playing this brilliantly fast game again will delight many. The simplicity of the gaming controls should also lend itself nicely to mobile devices. Although there have been later Sonic games or it can be played via an emulator the upcoming Android app will offer the optimum experience and increased responsiveness.

Sega has also stated that Sonic 2 is in development as an app although there is no specific timeframe for availability on that one. This original Sonic for Android app though will release in April and is priced at $2.99. We are waiting eagerly to download the app from Google Play but in the meantime we’ve embedded the official Sonic for Android gameplay video below this story. At three-minutes long it will give you a real flavor for the game and brought back many happy memories for me as I took a look at it.

If we hear any more on a precise release date for the game hitting the Google Play Store then of course we’ll let you know. What are your thoughts on the original Sonic the Hedgehog being ported to Android? Will you be waiting for this app to release? Let us know with your comments.