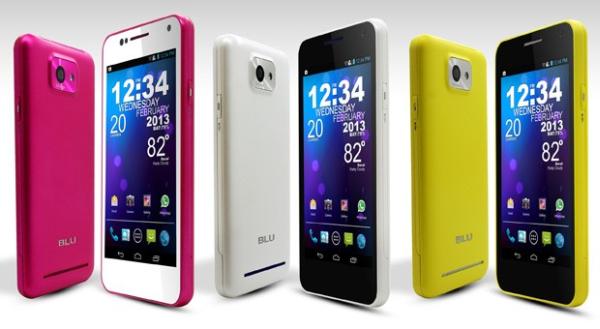 BLU Products are responsible for launching smartphones that are packed with features but still come at a more affordable price, and now the popular BLU Vivo 4.3 gets the Android 4.1 Jelly Bean update and colour treats along with a stock OS promise.

The BLU Vivo 4.3 smartphone was launched last year and at the time was touted as the world’s first dual SIM handset that also featured a dual core processor along with a Super AMOLED Plus display. The company has now announced the device is being updated to the Android 4.1 Jelly Bean operating system, and that the handset will now come in three new colour options.

Previously the device was only available in black but now those looking to pick up the BLU Vivo 4.3 also have the choice of Pearl White, Energy Neon Yellow, and Glimmer Pink. The handset features a 4.3-inch Super AMOLED Plus touchscreen display that provides a resolution of 480 x 800 that is powered by a dual core MediaTek MT6577 processor running at 1GHz.

This is paired with 1GB of RAM with 4GB of on board storage that can be expanded by a further 32GB via microSD card, and other features include an 8-megapixel rear camera, 1.3-megapixel front facer, and a 1,600 mAh battery.

The company has also revealed that in the future it will be moving to providing stock Android for all new devices and firmware upgrades to try and provide better battery life with a streamlined user interface. This news comes after the company revealed its new Life series of smartphones last month that offer some great specs at low prices.