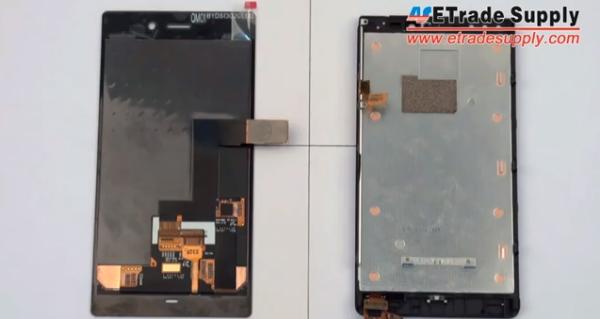 Speculation has been gathering pace in the last few weeks surrounding a flagship Windows Phone 8 smartphone from Nokia heading to Verizon Wireless at some point in the not too distant future. Now today we have a video comparison for you of the screen assembly of the Nokia Lumia 928 with the Lumia 920 and Galaxy S3.

There have been a lot of rumours surrounding the Nokia Lumia 928 recently that have included camera shots, and more recently some images of the screen assembly of the yet to be announced handset.

Now the company that were responsible for originally revealing the component, ETrade Supply, have made a video that has a detailed look at the screen assembly, which will still be the same size as the Lumia 920 which is 4.5-inches although the new model is slightly taller.

It seems that Nokia has changed direction in the construction of the display of the Lumia 928 and gone down the same route as Apple and Samsung, with all free layers of the display assembly attached directly together.

This compares to the Lumia 920 glass and digitizer that don’t touch the LCD display itself, while the three layers of the 928 are fused together with an optical adhesive. This will make it harder for dust to get in-between the layers and reflect light less.

The video goes on to compare the assembly with the Galaxy S3 and how the unit is connected to the motherboard, which will mean the Lumia 928 will be more difficult to change just single components such as the digitizer or LCD, and will also mean more expense. Check out the video for yourself below.