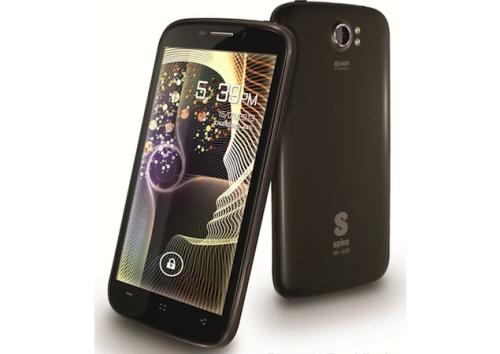 The bundled cameras that come with our mobile phones have come a long way since the days of being provided with those dull and grainy images, and now the Stellar Pinnacle Pro Mi 535 has been announced and priced that brings high end camera specs to India.

Spice has recently revealed the latest handset in its armoury called the Stellar Pinnacle Pro Mi 535, and it’s the first smartphone from the company that is using a quad core processor under the hood. The device is expected to be available by the end of the month and priced at Rs. 14,990 with the company offering the handset via retailer Saholic with exclusive pre-orders from today.

The handset features a 5.3-inch IPS touchscreen display with a resolution of 540 x 960 that is powered by a quad core Mediatek processor running at 1.2GHz with 1GB of RAM running the Android 4.2 Jelly Bean operating system.

There is also 16GB of internal storage that can be expanded up to a further 32GB via a microSD card, dual SIM support, Bluetooth 4.0, 3G, GPRS/EDGE, Wi-Fi with Wi-Fi tethering and hotspot, and a 2,550 mAh battery unit.