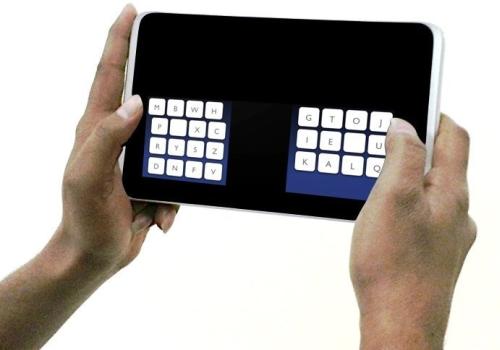 While there are many that still prefer using physical keyboards most mobile devices have some sort of virtual keyboard installed. If you try and type at any great speed though you can often make mistakes, but a new keyboard called KALQ brings faster typing using your thumbs with an Android app coming.

The QWERTY keyboard has been used what seems like forever but scientists have come up with an all new keyboard for use on Android tablets what is being called KALQ. It splits the keyboard into two pieces so users can quickly type using their thumbs.

It has been created so the keys are placed to reduce the distance that the user’s thumbs have to move the reach the next letter. In use it has been found that after getting used to the new keyboard design users were reaching 37 words per minute with a 5 per cent error rate, or a 34 percent increase in speed compared to the conventional layout.

This has been found to be substantially better than the standard QWERTY keyboard, and the new format also takes up a lot less of the screen. As the letters are divided into two both thumbs will be working the same amount with the space bar sitting in between.

There is the option for reversing the keyboard for left handed users along with altering the size to suit each individual’s hands. The team behind the new design believe it will take the average user around eight hours to perfect typing on the new keyboard design, and an Android application has been promised to be released next month.

I have been using a number of different keyboard applications on my smartphone that include SwiftKey and iKnowU, which we recently compared in use, and if a smartphone version does become available we will give it a hands on review for you.

Do you like the look of this new keyboard design?