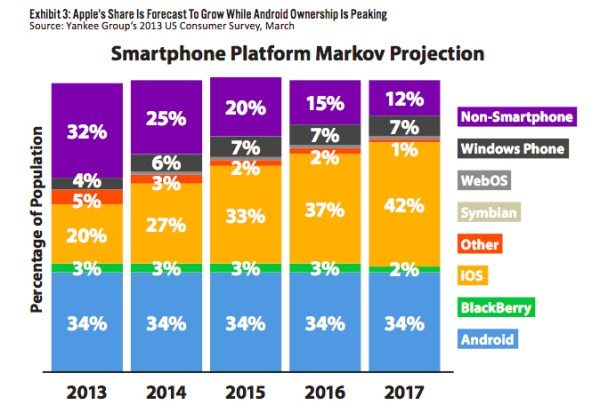 Today we’re looking at smartphone ownership and a new study that suggests the iPhone 6 will assist towards an Android takeover. Although lately Android has been the dominant smartphone platform a new survey of smartphone owners in the US indicates that in just a few short years more people will own an iOS iPhone than an Android phone.

This seems to be mainly because iPhone owners have a strong loyalty to Apple’s iOS platform. A survey of 16,000 people in the US conducted by Yankee Group over the last year asked about the smartphones they were using now and phones they intended to purchase. Approximately half of the survey participants currently own an Android phone while around 30% own an iPhone. However, of those who said that they would be purchasing a new smartphone over the next six months, 42% said they would be choosing an Android device while 42% said they would be buying an iPhone.

If the current trend continues then the forecast is that the amount of iPhone owners in the US will overtake Android phone owners within the next few years. Check out the chart image above to see smartphone platform projection figures. Yankee Group VP Carl Howe therefore feeles that Android has peaked while market share of the iPhone will continue to grow.

This seems to contradict figures that we discussed yesterday showing that sales of the iPhone showed the growth rate was currently falling and that the iPad would drive future Apple growth. However Howe also asserts that that the growing iPhone ownership will also see the iPad remain dominant in the tablet market.

This latest survey is certainly interesting but of course relies on the current trends continuing whereas who knows what could happen over the next few years. There will certainly be a lot of interest in the iPhone 6 as part of this driving force for Apple. The iPhone 5S is rumored to be an incremental refresh of the iPhone 5 while the focus for something really groundbreaking seems to be on the iPhone 6. It just remains to be seen if Apple can come up with the goods and then of course the pattern at the moment regarding future smartphone ownership could certainly continue in its favor.

We’re really interested to hear what you have to say on this matter. Are you are an Android enthusiast and think the survey indicators will not be borne out? Maybe you’re an iPhone owner and can tell us if you will remain loyal to the iPhone or would consider jumping ship? Let us know with your comments.