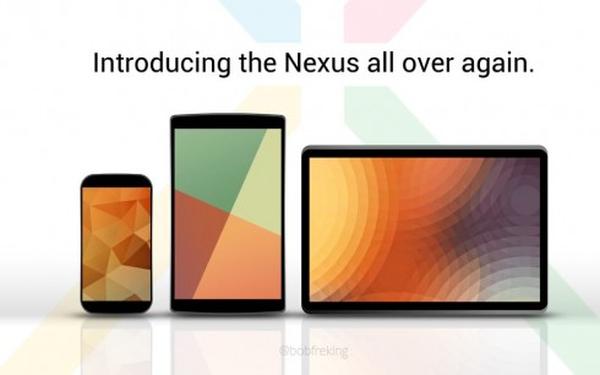 Next week will see the highly anticipated Google I/O event where hopefully we will get to see some new Android software and the hardware that will be running it. Now in the meantime it is time to meet the new Nexus 5 and family design ideas.

The image you can see on this page is the work of talented designer Bob Freking that has come up with a number of new concept ideas for the Nexus family. First up is the LG Nexus 5 that has a Full HD True IPS+ touchscreen display that is using the Qualcomm Snapdragon 800 quad core processor clocked at 1.9GHz and paired with an Adreno 330 for the graphics.

Camera wise the Nexus 5 design has been treated to a 13-megapixel unit on the back while around the front is a 2-megapixel shooter. The handset design has an estimated price of $299 for the 16GB model.

Next up is the Nexus 8 that this time comes from Asus who are responsible for the Nexus 7, and features an 8-inch IPS LCD display with a resolution of 1200 x 1920 in a design that is more compact with narrower bezels.

Under the hood is the Qualcomm snapdragon 600 quad core processor running at a clock speed of 1.7GHz with an Adreno 320 GPU. This device would come with a 3-megapixel unit on the back and a 2-megapixel front facer along with a price of $199 for the 8GB version.

Lastly but by no means least is the Nexus 11 from Samsung that has an 11-inch Super PLS display at a resolution of 1600 x 2560, and powering this would be the Nvidia quad core Tegra 4 running at 1.8GHz. Camera wise there is a 5-megapixel unit on the back while around the front is a 2-megapixel unit, and pricing would be set at $399 for the 16GB model.

Do you like the look of any of these Nexus designs?