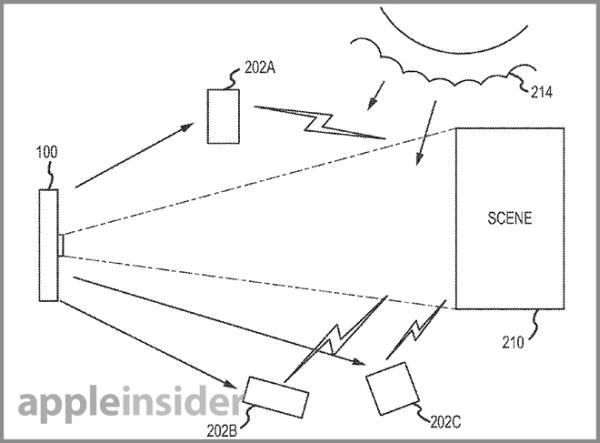 There is a train of thought that Apple will be simply giving the iPhone a slight upgrade this year by releasing the iPhone 5S, but now there are reports that the design of the iPhone 6 for next year may feature professional photography features.

We often get to hear about new Apple patents and a new one has just been discovered by the guys over at AppleInsider that if used would make the iPhone a more exciting offering for amateur photographers.

The patent shows a system that would allow the iPhone to remotely control other illuminating hardware, which is a similar thing that professional photographers do when taking images with a camera.

This idea though is not just limited to slave devices that are flash units which work from an optical signal from the main camera, but instead other iOS or third party devices could be used to provide extra lighting that would really improve the quality of the scene being taken.

The main device will also be able to take a test shot before information is given to improve the quality of the image being taken, which will mean the other devices will get an on screen notification on how to best angle the shot.

Connecting all the units together will be achieved via a Bluetooth or Wi-Fi signal that would replace the sometimes problematic optical system, but it has to be remembered that smartphone manufacturers especially Apple will get patents approved for them never to see the light of day on a commercially available product.

Do you think this idea will ever become a reality?