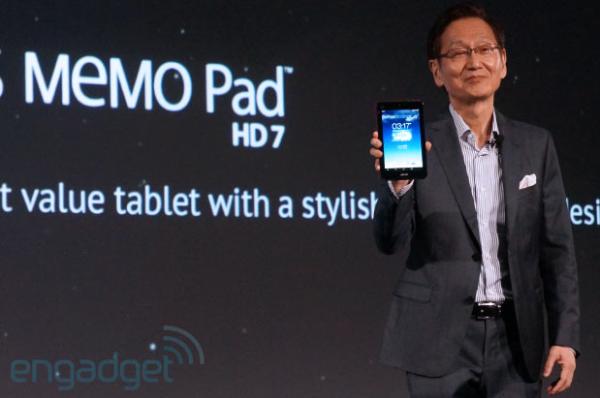 The Android tablet PC market is growing all the time with devices at various pricing levels, but its hardware at the lower end of the market that have been gaining more attention in recent times. A short time ago the Asus Memo Pad HD 7 was revealed that has a low starting price.

This latest budget slate has just been revealed by the company at the Computex event taking place in Taiwan over the next few days, and the new device features a 7-inch ten point touchscreen display with a resolution of 1280 x 800.

Other specifications include a quad core ARM 7 processor with 1GB of RAM and will ship running the Android 4.2 Jelly Bean operating system. There are two cameras fitted to the device with a 5-megapixel unit on the back paired with a 1.2-megapixel front facer.

The device according to the company will be aimed at developing markets but the prices were given in US dollars so suggests it may reach other markets in due course, with pricing set at $149 for the 16GB model and $129 for 8GB of internal memory.

It wasn’t clear if there was any expansion of this possible and the slate comes with SonicMaster audio technology and is expected to release during the third quarter. It remains to be seen if the device does reach other markets but there will be many consumers hoping it will become available.