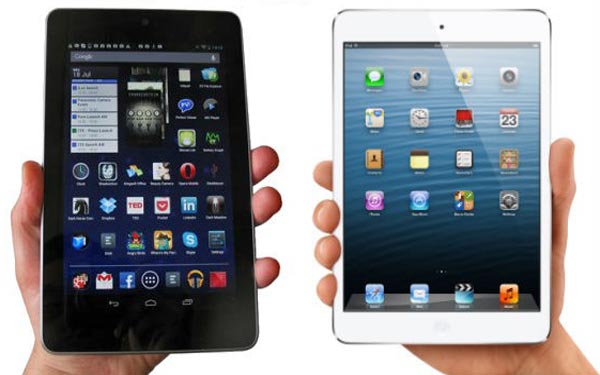 When it comes to purchasing a new 7-inch tablet two models keep being mentioned a lot, these include the iPad mini 2 and the Nexus 7 2. What we have found out via previous comments about these 7-inchers is very interesting indeed.

Last week we hit on a subject that deemed popular and that was when we talked about the iPad mini 2 and Nexus 7 2 release anticipation growing and the comments were very interesting to read, we will talk a little more about this in a moment.

It seems, if the Nexus 7 2nd-generation tablet does not release anytime soon then those that wanted to buy one would turn to the iPad mini. We asked a valid question saying, “If you are looking to purchase a 7-inch tablet, would you rather have an iPad mini 2 or second generation Nexus 7?” But after asking this question it seems the iPad mini is gaining from the from Nexus 7 2 wait.

Mixed Feeling Comments
The comments on our previous article were very interesting indeed, one said “Which of two un-announced devices do I prefer…lol,” we still believe we asked a valid question, and the comments prove it was the right question.

The comments seem to have mixed feelings by readers, but the end conclusion basically shows if the Nexus 7 2 is not released soon people may flock to the iPad mini. Some say it’s the gaming side of things they prefer so they would choose the iPad mini and a few comments have said they have been waiting far to long for the second-generation Nexus 7 and they need a 7-inch tablet now.

It is rather interesting to see our reader’s comments, and one of them stated they have waited for the new Nexus 7 since March and if it is not released by July they will opt for the iPad mini.

There are many other comments so please do read them by clicking on the link provided above, some do say they will stick with Android, even Android users are saying the iPad mini seems to be more favourable at the moment. You do get others saying you could buy two Nexus 7 tablets for the price of a new iPad mini 2.

If the Nexus 7 2 is not released by July will you opt for the iPad mini?