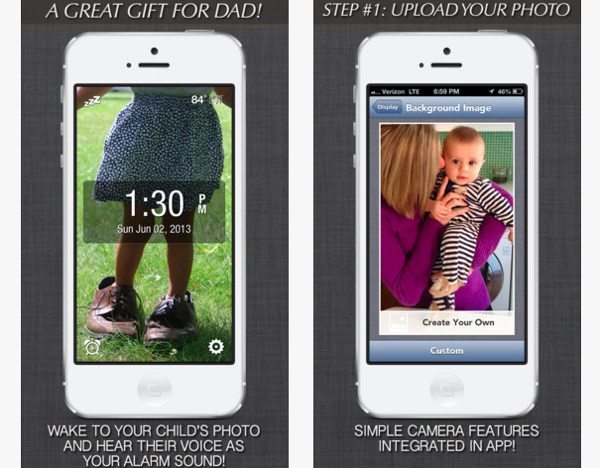 This Sunday June 16 is Father’s Day in the UK, US and some other countries across the world. It’s often a day when families get together, and then you may well need some kids activities to keep them amused and busy. With this in mind we thought we’d round up some of the top Father’s Day kids activity apps for iPhone and iPad, with coloring, painting, games and other recreations.

Father’s Day is a very special day for Dads, as it gives kids the opportunity to show how much they love and appreciate them. We’ve previously rounded up some of the Best Father’s Day apps with quotes, poems, greetings cards and more, so if you want these sorts of apps check it out at the link above. In this collection though, we’re concentrating on apps for the kids. If you want more info or to download any of these apps, simply click on the title links for each to be taken straight to the App Store.

The first app we have for you is Kids Fingerpainting — Father’s Day HD at iTunes. This one is obviously a free app and it’s compatible for the iPhone, iPod touch or iPod running iOS 4.3 or later and optimized for iPhone 5. This is a great way for kids to show their Dad’s some affection and they can color pictures and then add a frame and their own message or autograph. There are various coloring pages to choose from with 10 pre-set colors, a customizable color palate, color shading, variable brush sizes, and custom frames, and then they can save their work to a Photo Library.

Our next activity app for Father’s Day is Color and Play on Father’s Day HD. Again this is a free app but this one is for iPads only, running iOS 3.2 or later. Key features include a selection of original coloring pages, frames, sound effects and the ability to add an autograph. In fact many of the features are similar to the previous app. However, after the kids have finished their masterpieces they can then have them scrambled up to create a puzzle game, combining creativity and logic in one app. 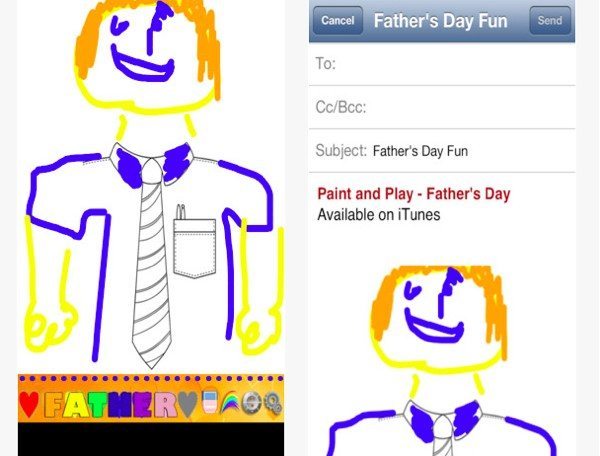 Moving on we come to Paint and Play — Father’s Day. This is another free app and it’s compatible with iPhone, iPod touch and iPad running 4.3 or later, and it has been optimized for iPhone 5. This has 25 illustrations to color and the app also features interactive sounds and colors. There are 8 preset colors and a near infinite color palate, and you can use a camera to capture a pic to draw on or select a picture from the photo library. The app also has a spider puzzle game as well as a matching game, and the kids can save, email, or post the picture on Facebook.

This one is a neat idea to keep kids and their Dad’s amused as it’s a game that both can play. The Father’s Day Game: Fishing with my dad for iPhone app is priced at $4.99 /Â£2.99 and is compatible with iPhone, iPod touch and iPad running iOS 3.0 or later. This would be particularly good for Dads who enjoy fishing and the game involves catching fish for coins, which they can then trade in for more lures, bonus fish and point modifiers. Will Dad or the kids do best?

The next suggestion is not specifically for Father’s Day but is a great app for family occasions. It’s Fun for Kids: Activities For Your Family and this app is priced at $0.99 /Â£0.69. It’s compatible with iPhone, iPod touch and iPad running iOS 3.1.3 or later and offers more than 200 fun activities including crafts, games and entertainment. This app also features integration with Facebook, Twitter and Email.

The very last app we have for you to consider is a little different and a great way to start Father’s Day. This is A Father’s Day Alarm Clock — wake to a photo and message from your kids! The title of this makes it fairly self-explanatory, and this is a unique alarm clock app that enables you to upload photos of the kids. They can also record their own personalized alarm to wake up Dad, and there are features such as a choice of alarm sounds and a white noise sound machine. It’s a really neat idea, and we’re sure most Dads would appreciate it (although not if they want a lie in)! This app is priced at $0.99 /Â£0.69 and is compatible with iPhone 3GS, iPhone 4, iPhone 4S, iPhone 5, iPod touch (3rd, 4th and 5th generation), and iPad running iOS 6.0 or later, and it has been optimized for iPhone 5.

This concludes our roundup of Father’s Day kids activity apps for iPhone and iPad, and we hope that among these suggestions you find just the one that you are looking for. If you have any other great Father’s Day apps that you wish to recommend from the App Store, why not let us know by sending your comments to us.