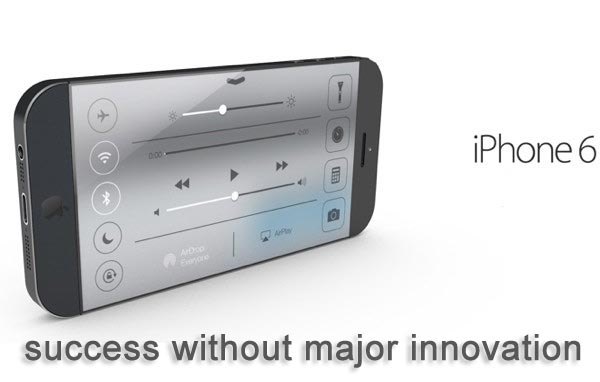 The iPhone 6 could release without any major changes and still be a major success. While this wouldn’t mean everyone would jump in-line, it is true that Apple has created a following with loyal users loving iOS and the Apple hardware.

Apple’s iPhone 6 isn’t expected to release until next year with a minor 5S model this year, although we shouldn’t count out a surprise launch of iPhone 6 this fall but most analysts agree that Apple’s success is already written thanks to the business model they have. Users are invested in iOS with thousands spent on apps, music and other media. The love for Apple seems to grow each year for many of their products, and a large number of Android users sit back a wonder why?

Innovation and Apple — there is no denying the fact that Apple made history with the iPod, iPhone, iPad and other hardware but can they really innovate again? Or shall we say, does Apple need to innovate anytime soon?

We would love to see some radical changes to the screen size of iPhone 6 with a few models launching, but a number of Android users looking at iOS 7 wonder if Apple really care about innovating just yet. We have been hands-on with the iOS 7 beta and love the changes, and while we might call some new features a “major” upgrade it seems Android users like to speak about what they have had for years (even if most iOS users would never dream of moving OS for lots of reasons).

The previous sales, interest in iPhone 6 and a so-called iPhone 5S reveal massive pre-orders are likely. This would still be the case even if the design stayed pretty much the same with just a specs jump and a twist of repackaged technology. Apple knows how to do this very well and somehow they could make a few new colors sell.

In our opinion, after owning every generation of iPhone we bet that the majority of users would just skip a generation if the current upgrade isn’t enough rather than jump to an unfamiliar Android OS.

One of our readers put it like this; “you don’t see much innovation from Apple anymore as they don’t have to innovate”. This seems like a strange comment, although it highlights the perception of how loyal Apple’s users are but would you agree with this comment? If the iPhone 6 changed slightly, would you still stick with Apple?

What would an iPhone 6 release need to bring for your money? We have heard from a few of our readers that don’t want Apple to change much, and they want the iPhone 6 design to keep phone-like rather than jump on the phablet craze.

Share a comment below with your specs wish list for iPhone 6, and also how successful you think Apple will be if it keeps delivering tiny updates without major innovation? While we are on the topic of specs, it seems some of our readers think the iPhone 5 went too thin and they preferred the 4S thickness. Do you agree with this, and if not how thin would you like to see an iPhone 6 when it releases?