The new Samsung Galaxy S4 Zoom, which is more like a camera rather than a phone, was introduced but without a price or release date, but we do know it is pegged for a summer release. Now we have some details on a price that popped up on a retailers site.

We have found some details on the price via a German website called CyberPort but for some reason overnight the price mysteriously disappears without a trace, but we took a screenshot of the page before it was titled “Product no longer available.” 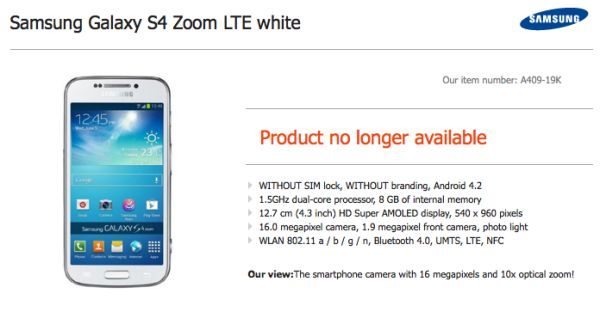 The price as you can see in the screenshot stated the Samsung Galaxy S4 Zoom would be 499 Euros, we believe it has been taken down because Samsung has not officially announced its price yet.

The Zoom will come running Android 4.2 Jelly Bean and powered by a 1.5GHz processor, other key specs include 8GB built-in memory, 1.5GB of RAM and a microSD card slot for up to 64GB cards.

The bottom line is no official price has been announced for the Samsung Galaxy S4 Zoom, but if it were priced at around 499 Euros would you consider buying one?