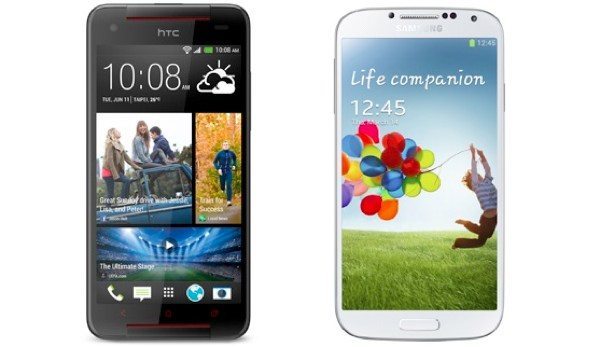 There are some really impressive smartphones around at the moment and the just-released Samsung Galaxy S4 is available across various world regions and carriers. The HTC Butterfly S was just officially introduced and will release in some markets in Asia in July with other world regions to follow. Today we want to compare the HTC Butterfly S vs. Samsung Galaxy S4 in a specs shootout.

We’ll take a look at the key specs of each device to give you an idea of how they contrast and we also have a brief video that gives a comparison of the two devices. We’ll begin with a rundown of the specs of these two smartphones, that both run the Android Jelly Bean operating system.

As you can see, many of the specs for each handset are in fact very similar with nothing between the Butterfly S or Galaxy S4 on screen resolution and ppi, or processing power. Both phones also have the same RAM and both have expandable internal storage although the Galaxy S4 does come with more storage options. They also run the latest Android Jelly Bean OS although you may prefer the HTC Sense UI over Samsung’s TouchwWiz UI or vice versa.

As far as cameras are concerned, we should point out not to be too concerned by the apparently low megapixel sensor for the HTC One. This is because it is an UltraPixel camera, capturing 300% more light than most other camera sensors of smartphones, meaning it is particularly good in low-light conditions. Both phones also have an abundance of various features, and this may also influence any decision between the two, along with the design and build quality.

Below this story you can see a short video comparison of the two phones, which succinctly wraps up the pros of each one over the other. For example the Galaxy S4 is lighter and thinner than the Butterfly S and has a removable battery, superior contrast, wireless charging and much more. The Butterfly S though is noted as having a premium design, larger battery, brighter display, superior speakers and more. Check out the video to see the full details of the benefits of each. We’ve also embedded another video that gives a brief overview of the HTC Butterfly S.

We’d really like to hear your views on the HTC Butterfly S vs. Samsung Galaxy S4. Are you thinking of purchasing a new smartphone, and if so, is it more likely to be the Butterfly S or Galaxy S4? What is the main factor in your decision? Send your comments to let us know.