We ought to start by giving you a some of the key specs of each device so we’ll begin with the Xperia Tablet Z. This is powered by a 1.5GHz Qualcomm Snapdragon quad-core processor, has a 10.1-inch display with resolution of 1920 x 1200 and 224 ppi, 2GB of RAM and 16 or 32GB of internal storage, expandable via microSD to 64GB. It also has an 8.1-megapixel rear camera with 1080p video capture and a 2.2-megapixel front-facing camera, and runs Android 4.1.2 Jelly Bean with a planned upgrade to 4.2 Jelly Bean.

Finally we have the Google Nexus 10 tablet, which was produced by Samsung. This tablet has a 1.7GHz Exynos dual-core processor, a 10.1-inch display with 2560 x 1600 resolution and 299 ppi, 2GB of RAM and 16 or 32GB of internal storage (non-expandable). It also carries a 5-megapixel rear camera, a 1.9-megapixel front-facing shooter, and it runs Android 4.2 Jelly Bean, upgradable to 4.2.2 Jelly Bean. 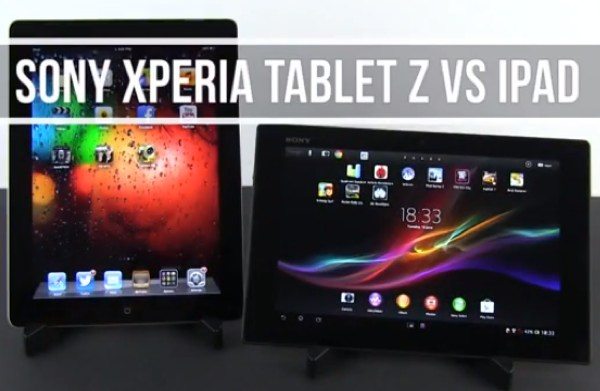 Obviously we cannot give all the specs and features of each device but they all have a lot to offer and various pros and cons. Your choice could be made on your preference of Android or iOS alone, or of course personal taste in the design of the tablets. We have two videos that give good comparisons that will show you a look at the hardware and what each tablet brings to the table.

The first video is just over 8-minutes long and compares the Sony Xperia Tablet Z vs. the iPad. One of the things noted regards the weight of each of these devices with the Xperia Tablet Z weighing in at 495g as opposed to approximately 650g of the current iPad. That’s quite a significant difference, and if you favor something lighter then the Xperia Tablet Z is a good choice. However, it’s also pointed out that the iPad wins on display quality and battery life.

The second video is almost 10-minutes long and compares the Sony Xperia Tablet Z with the Google Nexus 10. This first compares the design of both tablets, then goes on to look at the displays, processors and other specs, performance, battery life, cameras and more. Ultimately, both are seen as excellent tablets but your choice may depend on what you most use a tablet for.

You can check out all three of these tablets in the videos that we have embedded for you below this story. In the contest between the Sony Xperia Tablet Z, iPad and Nexus 10, which device tempts you the most? Let us have your comments on these three tablets with your own views of each.