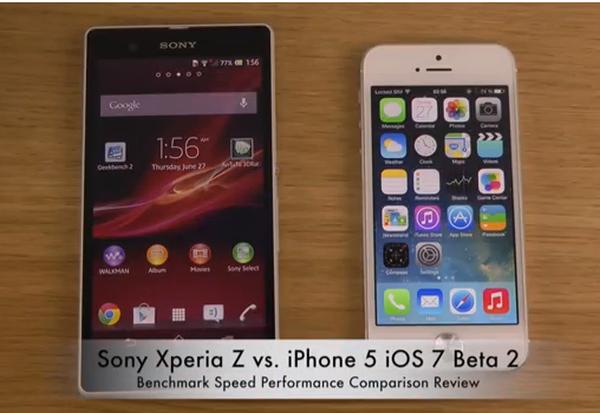 The Apple iPhone 5 may have been superseded by a number of newer smartphones in the last few months, but the device is set to get a boost soon once the iOS 7 operating system is released later this year. We now have a couple of videos for you that are looking at the Sony Xperia Z vs. iPhone 5 with iOS 7 beta 2.

We have provided you with a video comparison before but this was with iOS 7 beta 1, and now we can see how the iPhone 5 with iOS 7 beta 2 performs against the Sony Xperia Z. The first video starts by running a couple of benchmark tests on both of the handsets with the Sony hitting 2292 while the iPhone 5 gets 1674.

The video then goes onto a graphical benchmark test with the iPhone 5 getting a score of almost 12,000 compared to 5,000 on the Sony, but this device is rendering a Full HD display compared to around 720p on the iPhone 5.

It then goes on to another graphic test that runs both handsets at around the same resolution that returns a score of around 2,100 on the Xperia Z and 2,500 on the iPhone. The next video runs the two devices side by side in a boot up test to see which is fastest.

This is done by first switching both handsets off with one achieving this a lot quicker than the other, and with a different result returned when booting the handsets back up, but we won’t spoil the results for you just check out the video below.