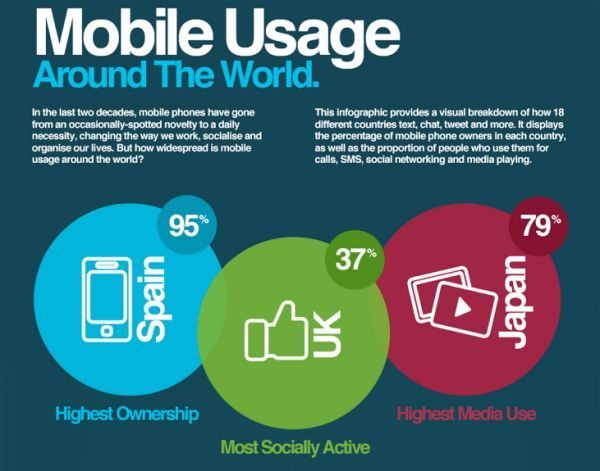 The use of mobile phones around the world differs massively between the various countries and continents, with text, call and data usage fluctuating greatly around the world.

A visual representation of mobile phone use created by Lebara shows that, across the globe, how people use their handsets varies a lot.

For example, social networking on mobiles is far more prevalent in the UK than anywhere else in Europe. But Middle East nations such as Jordan, Lebanon and Egypt also show high mobile social networking figures.

More Mexicans use their phones to text than call, and people in Japan are most likely to use their mobiles as media players. And the Chinese population owns more mobiles per capita than neighbour Japan, but just 1% use their handheld for social networking.

The infographic, created from data collected by Pew Research Center and the United Nations, also illustrates growth in mobile phone ownership over the last decade.

Comparing continents for call, SMS and data usage, Asia has the highest call usage at 99%, but the lowest data usage at 42%. Europe and the Americas have strong usage for each aspect. Such figures likely reflect the differences in price plans and the prevalence of contract versus pay-as-you-go billing models.

The infographic paints a clear picture of how mobile technology has changed and transformed our lives and impacted the way we live, work and play. The significant differences in how people in different countries use their phones demonstrate the acceleration and variation in the mobile revolution and shows how mobiles are used for a variety of reasons.

Please take a look at the infographic below.