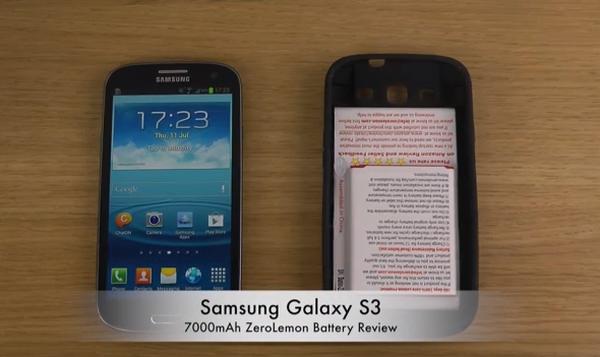 Smartphone battery life can often be a touchy subject among owners of certain handsets, and sometimes no matter how good it is there will be times that we need more. There are solutions to this problem though in the form of replacement batteries or special cases, and today we are looking at some ZeroLemon battery reviews for the Samsung Galaxy S3, S4, and Note 2.

The first video we have for you is the Samsung Galaxy S3 and the 7,000 mAh ZeroLemon battery pack, which compares to the 2,100 mAh battery that comes with the handset. The replacement battery is huge and takes a while to get it fitted correctly but when it’s in place with the special rear cover put over the top of it you can see how much larger the handset is now.

It has a matte feel to it and the volume controls and power button now need a harder press for them to work, but the rear cover does add some protection to the smartphone. The next video is for the Galaxy Note 2 which is a handset that is always praised for its battery life but the ZeroLemon now adds a 9,300 mAh unit compared to the 3,100 mAh battery that comes with the smartphone.

The battery pack comes with a similar rear case that includes all the cut outs for the handsets features including the stylus and this one seems to fit in easier than the Galaxy S3 version. Once fitted it at least doubles the thickness of the smartphone with a weighty feel that the reviewer liked, but previously we have seen one user fit a 9,000 mAh battery to their Note 2.

Again the buttons need a firmer press to get them to work and when fitted a unit such as this may not be ideal for everyday use, but if you know it’s going to be a long time before you can reach a charger it will be ideal.

The last video we have for you is the Galaxy S4 version of the ZeroLemon battery pack and is 7,500 mAh in size, which replaces the 2,600 mAh standard battery. Check out the three videos and tell us if you ever need a boost in battery such as this.