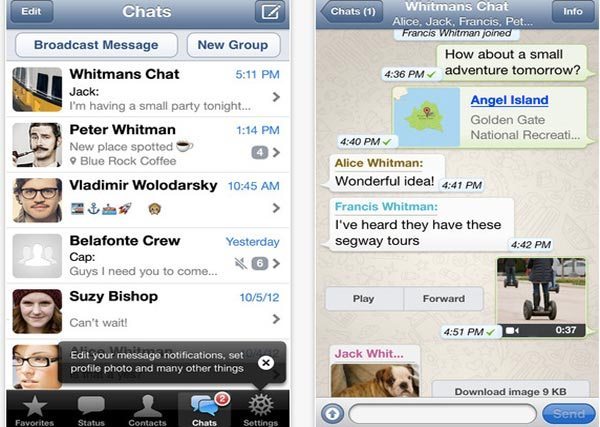 The appeal of WhatsApp Messenger for smartphone users is pretty obvious considering you can send video, audio notes, pictures and messages for free rather than using traditional text and SMS messages via your phone operator. With millions of people using WhatsApp on the iPhone, Android and other mobile platforms, it has become viable for people to use this 3rd party chat alternative.

New WhatsApp update for iPhone — within the last couple of days a new WhatsApp update has launched for iPhone bringing more features and bug fixes. The new WhatsApp iPhone update version is 2.10.1 and the release notes state that you’ll find an iCloud chat history backup and restore, URL schema support for 3rd party apps and the ability to send multiple photos at the same time thanks to a new multi-send UI.

It is worth noting you will find the new backup options inside settings, and then you’ll see chat backup inside chat settings. Hit the comments with your thoughts on these new improvements, and also what you would like to see in the next iPhone update for WhatsApp?

Over the past few months we have heard from a number of our readers looking for an iPad alternative for WhatsApp. This is thanks to the lack of an iPad app at the time of writing, and while this new update brought new features to the iPhone version, we have still not heard anything new about WhatsApp for iPad.

Would you download WhatsApp for iPad if it saw a release date later this year? You can see the new update on iTunes or by updating the app within iOS, although this task will not be needed when iOS 7 releases with auto updates as we tested in the beta version.