HTC One, Samsung Galaxy S4 in the Mini debate 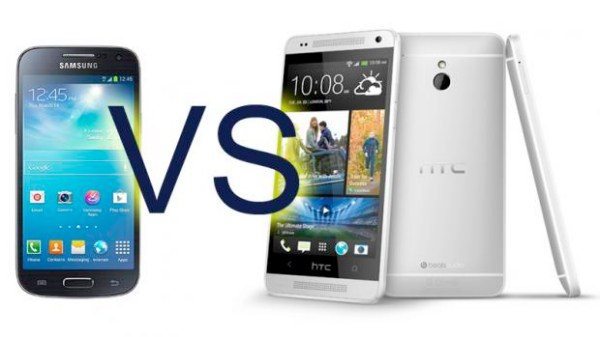 We’ve been bringing readers details about the recently released Samsung Galaxy S4 Mini as well as the HTC One Mini that is expected to launch in August. These are so-called ‘mini’ versions with some lesser specs than their larger counterparts, the Galaxy S4 and HTC One respectively. Now the HTC One and Samsung Galaxy S4 are the focus of a Mini debate.

A new report has got us thinking about Mini versions of popular smartphones and makes a good point of saying that since when has a 4.3-inch display been ‘mini?’ The Galaxy S4 Mini and HTC One Mini both have 4.3-inch screens with less resolution than their full-sized versions. The S4 has a 5-inch display and the HTC One has a 4.7-inch display.

Meanwhile the existing Apple iPhone 5 has a 4-inch display, and that was an increase over the 3.5-inches of the iPhone 4S. Nobody ever thought of the iPhone as a ‘mini’ sized phone, although there is talk that the display may increase in size for the iPhone 5S. The article on Forbes discusses ‘mini’ varieties of phones and makes another good point by saying that if they are smaller versions, they should be sizably smaller but have the same specifications.

There are likely to be many people who would like to see a much smaller version of a top-end smartphone that still has the same capabilities and power potential, but major manufacturers aren’t offering this with their mini varieties. For example the standard HTC One has 2GB of RAM, 32 or 64GB of internal storage and a 1.7GHz quad-core processor. For the HTC One Mini though, this gets cut to 1GB of RAM, 16GB of internal storage, and just a 1.4GHz dual-core processor. Whatever way you look at it, that’s hardly a mini version of the standard version.

When you think about it, manufacturers are playing on the popularity and reputation of the full-sized phones and cashing in on the success of those devices with mini versions. Apart from the designs and software though, these have little similarity with the standard handsets. Indeed customers who don’t look too deeply into a purchase may well think that the devices carry the same specs but that one is simply a smaller version of the other.

In the last few years we’ve seen a growing trend for smartphones with large displays, but there are likely to be many people who would like a high-performance smartphone in a smaller form factor. It could be said at the moment though that mini versions of popular smartphones don’t fit that idea at all, and it would be interesting to see a major manufacturer come up with a smaller model of a successful top-end smartphone that offers the same specs.

We’d really be interested to hear what readers have to say about the HTC One, Samsung Galaxy S4 and the debate about mini versions. Are you happy enough with the current ‘mini’ phones on offer, despite the lesser specs? Alternatively are you waiting for a ‘true’ mini version of a phone with equally as impressive specs? Let us have your comments on this.

4 thoughts on “HTC One, Samsung Galaxy S4 in the Mini debate”