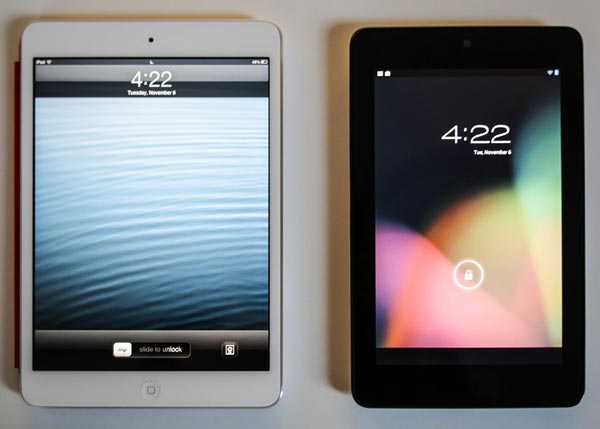 It is pretty easy for some people to choose when looking at the new Nexus 7 vs. iPad mini 2, and while we are yet to see the official specs for the Apple tablet, there are a few things you can almost guarantee. The iPad mini 2 will release with a bezel no thicker and nothing like the letterbox screen ratio you see with the Nexus 7 2.

One of the best examples of the difference in screen aspect ratio and how much is lost on the previous Nexus 7 vs. iPad mini can be seen in the image below that Apple showcased at the original mini iPad announcement. This reveals that the smaller iPad benefits from a 67 percent larger display, and while the screen is only 2-inches smaller than the iPad 4 it looks and feels a lot smaller thanks to the form factor shrinking a lot. 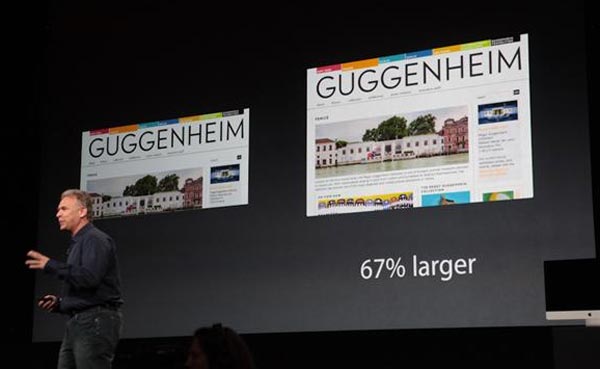 The new Nexus 7 second generation can be seen in a comparison photo below this article, which stands side-by-side with the current iPad mini. This photo clearly shows how much thicker the Nexus 7 2 bezel is and the 16:9 ratio compared to iPad mini’s 4:3 aspect ratio. We don’t expect that ratio to change on the iPad mini 2, so a purchase choice could very well come down to screen real estate for some people.

It is true that the Nexus 7 2 offers new higher specs with a cheaper than iPad price tag, which a lot of Android users think Apple would never match or beat. These people often state, “Apple charges more but delivers less specs”. Then we have the desire for Android, and a lot of people hate the idea of having a tablet with iOS.

The bottom-line: while we expect the new Nexus 7 vs. iPad mini 2 battle to be clear for both shoppers of Android and iOS devices, it should also be noted that even a higher spec Nexus 7 2 will not stop Apple’s domination of the tablet market. The iPad mini 2 and full size models will continue to be featured everywhere a lot more than Android tablets, and people will gladly pay more for what Apple offer.

Personally, the iPad mini 2 will be much more desirable for us thanks to the thinner bezel and improved screen real estate. The letterbox style display when in landscape mode and thicker bezels just don’t do it for some people, although we totally understand why some shoppers will want a higher spec Nexus 7 2 for less money. If you want to see some visual reviews of the current iPad Mini vs. Nexus 7 2 then see these comparison videos.

7 thoughts on “New Nexus 7 vs. iPad mini 2, bezel and letterbox”