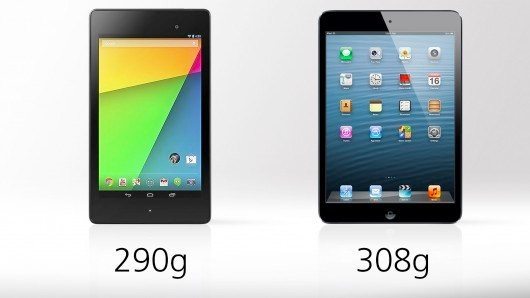 The new Nexus 7 tablet has just been officially introduced, and the second-generation of this tablet is bound to find plenty of buyers in various regions worldwide. Any new smaller tablet device will always be compared to the iPad mini, so today we want to share with you an iPad Mini vs Nexus 7 2 comparison video anthology.

Before we detail the comparisons we’ll give you a quick rundown on specs of each so that you have an idea before you view the videos. The iPad mini released last November and is powered by a 1GHz Apple A5 dual-core processor with a 7.9-inch LED-backlit IPS LCD display offering resolution of 1024 x 768 and 162 ppi.

The cheapest iPad mini price is priced at $329 for the 16GB variety. The Nexus 7 will release at the end of this month in the US followed by other regions, and the 16GB version is $229.99 so there’s a substantial difference in pricing. Now we’ll move on to the selection of YouTube videos that we’ve embedded below this story.

The first is an 8-minute look at the Nexus 7 2 vs. iPad mini and gives a good roundup of details about these two tablets. It gives side-by-side specs and dimensions and weights as well, in a very clear comparison. The second video is a much briefer comparison of the new Nexus 7 2 vs iPad mini at just two-minutes long but power packs a lot into that time. It concludes with a look at the advantages of each tablet side-by-side and you can also vote on your preferred choice.

The third video is the Nexus 7 2nd Gen vs iPad mini and is basically a table of specs for easy comparison of one against the other. Specs of the new Nexus 7 tablet are clearly superior to the iPad mini, and at a far cheaper price it looks like a no-brainer. However, some people will choose depending on which operating system they prefer. We should also bear in mind that an iPad Mini 2 is expected to launch later this year that is likely to have improved specs at around the same price.

Please note that in the image below the new Nexus 7 is on the left with the iPad mini on the right. We’d really like to know what you think about the iPad mini vs. Nexus 7 2. Have you a clear choice of winner and if so, which one would you opt for? Let us know with your comments.